Fighting for those who can’t speak for themselves 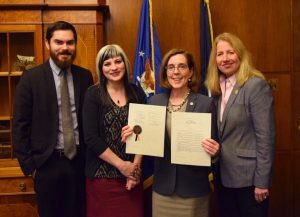 When Thomas Lamb Eliot founded the Oregon Humane Society, it was based on the fundamental belief that the compassionate treatment of animals is the cornerstone of a more humane society. For 151 years, fighting animal cruelty and abuse has been at the heart of OHS’s mission.

It begins with strong laws protecting animals and holding abusers accountable. OHS’s legislative efforts over the years have helped Oregon pass some of the toughest laws in the country.

Six Things You Should Know About Oregon’s Animal Protection Laws

The recent PACT Act that was passed by the Senate, and signed by the President, would make some of the most egregious forms of animal cruelty a federal crime. Oregon law already considers aggravated animal abuse a felony.

While there is strong legal protection for Oregon’s pets, it takes a dedicated team to enforce these laws, process evidence, partner with law enforcement, and ensure that abused and neglected animals get the care they need. 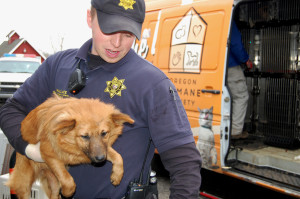 OHS Humane Special Agents are commissioned by Oregon State Police to enforce animal protection laws all over the state of Oregon. These agents work in the field; investigating reports of cruelty or neglect, interviewing witnesses, evaluating evidence and issuing citations. Often, OHS Humane Special Agents are working with pet owners to educate them on minimum care standards, and connect them with supplies and resources.

It also takes a skilled team of evidence technicians, investigations coordinators and attorneys who work behind the scenes to bring a case together. An average of 100 calls and online reports come in to the OHS Investigations Department each week. Every report is followed up on and a plan of action is put into place. Law enforcement agencies from around the state also contact OHS for assistance with evidence gathering and processing, veterinary forensic exams and onsite rescues.

While the team’s work is best known by the cases that grab news headlines, most of their work is done quietly, helping one pet and one person at a time.