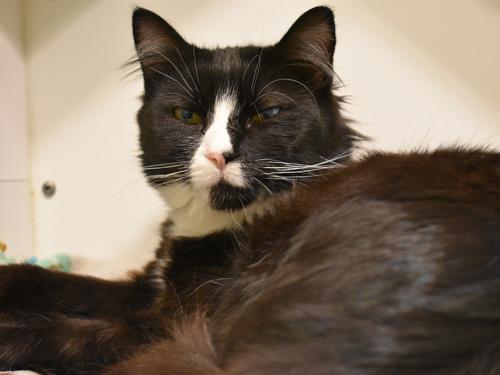 An elderly couple in Portland’s St. John’s neighborhood breathed a sigh of relief when OHS removed 20 cats and kittens from their home and brought them to the shelter for medical care and eventual adoption.

What started with just a few cats many years ago turned into a large colony of cats as the felines reproduced, and more stray cats came in through their open basement window, attracted by the available cat food, shelter, and other cats. The homeowners were facing major issues of their own, as their decaying home’s electrical and plumbing problems were forcing them to relocate.

The couple’s plight came to the attention of a visitor, who contacted OHS out of concern for the animals and elderly couple. After a meeting with an OHS Humane Special Agent, the couple was relieved to be able to voluntarily relinquish the animals to OHS.

The cats rescued were being fed by the couple, but nearly all of them needed medical care that they could not afford. The OHS Holman Medical Center treated the cats for hair loss, eye infections and dental problems, and soon most of them were ready for adoption.

A few of the cats, like Gypsum, shut down in response to all the sudden change. Gypsum was under-socialized and terrified of humans. To help build his trust and confidence, he was placed in our Behavior Rehabilitation program. For four months, staff worked with Gypsum with patience and care, celebrating milestones from the day he batted at a toy, to the day he accepted human touch, and finally on the day he was adopted.

Oregon Humane Society’s New Road Ahead Campaign includes a Behavior and Training Center that will give animals in need extra time, attention, and training before they are ready for their forever homes. The OHS behavior team is looking to the future when we have a dedicated space to help even more animals like Gypsum overcome their fear, learn to trust, and find loving homes.

Learn more about the New Road Ahead Campaign.