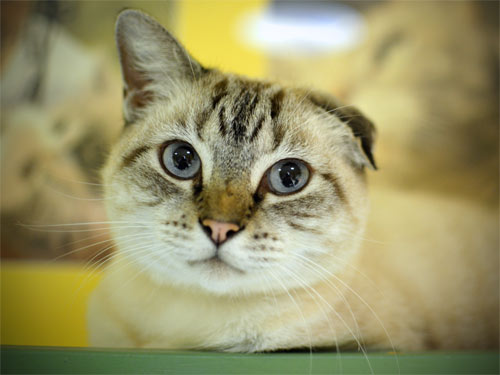 When Hurricane Michael roared through the Florida Panhandle, Panama City and Mexico Beach suffered catastrophic damage. As rescue and recovery began, the storm’s effect on animals became clear. Innovative solutions would be necessary to save lives and help pet owners in need.

A national effort began to empty the nearby Florida shelters that were not impacted by Hurricane Michael but were close enough to assist pets and people. The Oregon Humane Society stepped up to assist and receive pets from Florida. The OHS team met and decided to set up an off-site rescue center to temporarily house the cats and kittens and gradually move them to the main shelter for adoption. This plan would also allow OHS to continue to receive the regularly scheduled transports of cats and kittens from current shelter partners, ensuring we could save as many animals as possible.

Our plan was put in motion and the off-site rescue center was transformed into a kitty wonderland; large dog kennels were morphed into cat colony rooms and wire dog crates became comfy kitty condos. Once the arrival date and time was set, staff and volunteers mobilized and prepared for the largest single intake of cats and kittens in OHS history. Close to 100 cats and kittens were coming to OHS from Escambia County Animals Services in Pensacola, Florida.,

The flight from Florida was long but the resilient felines were eager to say hello as they were being unloaded. Popcorn, a 3-year old Siamese, reached her paws out of her kennel and tilted her head at her rescuers sweetly. Her meows became audible as she was moved in to the OHS transport vehicle.

Once the cats and kittens arrived at OHS’s off-site facility, the team checked them in and got them settled into their new home. One team member remarked that there was a kitty symphony of meows and purrs echoing through the facility. Perhaps it was the sound of gratitude, or a gentle reassurance that even during the worst disasters there are always glimmers of hope. A week after her paws touched down in Portland, Popcorn was adopted into her new loving forever home.

As we look to the future, OHS’s New Road Ahead Capital Campaign will ensure that we will be even better positioned to respond to rescues and disasters. The new Dedicated Animal Rescue Center will be invaluable to housing displaced pets, providing emergency boarding, and offering other resources during a crisis. This purpose-built space will ensure that OHS is always able to say ‘Yes!’ to helping when there are animals in need.

Learn more about the New Road Ahead Campaign.