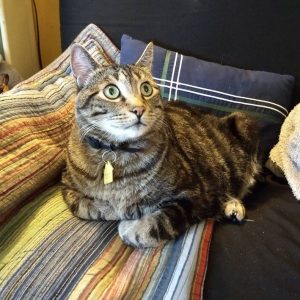 When Finley’s owner passed away, he lost the person who’d been his constant companion for seven years. But he faced another challenge. Finley was recently diagnosed with diabetes and managing his disease had been a challenge.

Finley was surrendered to OHS when his previous owner’s extended family was no longer able to care for him. Getting his diabetes under control was the first priority so the call went out to find him a foster home. It was mid-March and the team at OHS was working extra hard to get as many pets with special needs out of the shelter as possible. The COVID-19 pandemic was just starting to explode, and no one knew what was coming next.

Mike is an experienced nurse whose career had shifted to teaching. As his work moved online in mid-March, he considered fostering a pet. After hearing the news that OHS was looking for temporary homes for shelter animals, Mike stepped up to help. He was comfortable giving injections and knew he had the skills to care for an animal with special medical needs. Finley came back to OHS to have some dental surgery, but returned to Mike’s home to recover. Under Mike’s care, Finley regained his health and was ready for adoption. 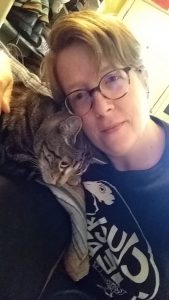 In a serendipitous twist, another nurse named Miriam had been watching Finley’s profile on the adoption page of the OHS website. She worked nights in a medical- surgical unit at a local hospital and was looking for a companion who would provide a sense of calm at the end of a stressful day.

“At first I thought I shouldn’t adopt another cat, and it would be extra work to manage his diabetes, but it occurred to me that if I could take care of diabetic humans, surely I could take care of a diabetic cat,” says Miriam. “Also, my family noticed that I kept going back to Finley and looking at him, so they said to go ahead and adopt him, so I did!”

Finley has settled in nicely to his new home, loves getting pets and being around his new family. Miriam reports that her son “can’t pass him (Finley) without giving him a snuggle and proclaiming his cuteness.”

Finley also seems to have an innate sense of where and when his calm, gentle presence is needed. “He gets along with everyone, and I have especially found that he will gravitate toward people who seem to need comforting for some reason,” adds Miriam.

Finley also seems to know when Miriam needs him. “He is generally waiting for me when I get home in the morning. “