A shy dog yearns for love after suffering from years of neglect.

When you first meet Aden, his shy personality is immediately evident. He will slink around with his tail deeply tucked between his legs and often look for a tightly enclosed space to feel secure. But he has a special kind of gentleness that comes from a yearning to be loved. Accepting love isn’t easy for Aden. But it’s easy to understand his reluctance when you learn about the trauma he endured.

Aden was part of a criminal case in Klamath County in late 2017. He, along with dozens of other dogs, was the victim of years of neglect, living outside in total filth. At the time Aden was rescued, he was hunkered down in the back of a dirty kennel, motionless and curled up in a tight ball. It’s as if he was trying to make himself disappear to escape his pain. He was so traumatized that he wouldn’t move. He was carried to safety, but his journey was far from over.

Aden and 18 other dogs from the case were transferred to the Oregon Humane Society in June 2018 to receive specialized care from OHS’s behavior team. Several months later, a group of dogs, including Aden, were selected for placement into experienced OHS foster homes.

Eleena Fikhman, OHS Customer Care Manager, met the dogs when they first arrived and was immediately drawn to Aden. “The majority of the dogs were barking and bouncing off the walls of their kennels as I passed by,” she says. “Then I saw Aden. He was this curled up, freckled little ball of a dog tucked into the corner so tightly, trembling and wide-eyed.”

Eleena had two other cattle dogs at home and worked with OHS trainers to come up with a plan for helping Aden heal. After more than two years, the court case has been resolved and Aden is ready for his next chapter.

Eleena reflects on their journey and her hopes for his new home. 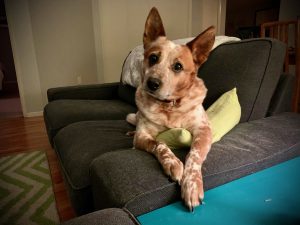 Aden was incredibly shut down when I first brought him home to foster. It was difficult to coax him out of his safe space in the bathroom to do anything. I kept a drag line on him and used lots of treats and verbal encouragement. At times I had to just pick him up to take him outside. But, after the first few days passed and we established a routine, he knew what to do. He still trembled and would avert his eyes, but over time this went away, and he learned to trust me and eventually even started to solicit affection.

He quickly learned his daily routine and which movements, or sounds indicated what was coming next. For example, the sounds of my other dogs’ collars jingling in the morning signified to him that it was almost his turn to go out for a potty break. He squeals with so much excitement and anticipation!

I eventually set up a crate for him in my living room. He took to it immediately and still loves to hang out in there. He now explores the backyard by himself and every so often I catch him rolling around on his back in the grass just being a dog. One of his most favorite things to do is to scratch his back underneath the bushes – all of mine now have indents underneath from his years of back scratching.

He’s the sweetest, quirkiest dog. He loves belly scratches and throwing his paw at you to indicate he wants more. He can be incredibly spazzy, like the cattle dog he is in his heart, and launch himself from far distances onto the bed or couch –and if he doesn’t make it, he tries until he does. It’s clear that Aden loves love and so desperately wants to give and receive love.

Eleena notes that Aden would benefit from an adopter with a calm dog, a securely fenced yard and quiet home. Interested adopters can learn more about Aden and submit an adoption questionnaire here.