Alone and vulnerable, this tiny kitten was destined for a short, tragic life. But donors saved Zuko’s life.

Zuko came to the Oregon Humane Society hurt from an animal attack. Only a few weeks old, he was far too small for his age, had bite wounds above his eye and a viral infection. It was heartbreaking to see this baby who’d suffered so much in such a short life.

Zuko was so fragile and small that OHS veterinarians worried he wouldn’t survive, and those worries only grew with time. He had trouble keeping food down and couldn’t put on weight. Tests for viruses and parasites came back negative, so it wasn’t clear what was wrong. But everyone was determined to help him.

Then, Zuko started to have seizures. The cause wasn’t clear, and that was concerning. He needed constant monitoring and lots of care. So an OHS veterinary assistant volunteered to foster him.

She looked after him day and night, and donors helped. Donors provided the vital supplies, like medicine and heat packs, to keep Zuko alive. But after three weeks, he’d barely gained any weight. Staff were concerned they couldn’t save him, but no one was going to give up on Zuko.

Because of donors, animals can get expert care to save their life. 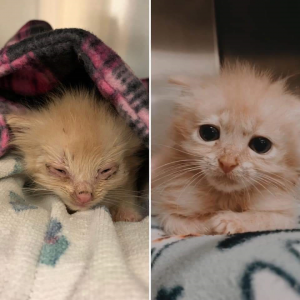 Although Zuko was struggling, his feisty personality came out anyway. He always wanted to play, and he wasn’t afraid of anything. Despite all his medical problems, he was a tiny, mighty warrior. He amazed his foster parent and staff with his grit and joy in spite of the constant flood of problems he faced.

Finally, after two uncertain months, Zuko began to thrive. He started keeping food down and putting on weight steadily. At last, he was starting to look like a healthy kitten. With his endless energy and tough attitude, Zuko loved to play with other animals — even dogs.

Luckily, Zuko was found by exactly the right person. She’d spent her childhood on a farm, so she felt comfortable around animals with medical issues. Plus, with a friendly dog and cat at home, Zuko would have the friends he needed. After a successful adoption appointment, she was able to take Zuko home.

Without donors, pets like Zuko wouldn’t get the help they need.

There are an increasing number of homeless animals all across the country. Locally, we’re seeing more weak and fragile kittens. And the need is growing as the days shorten and the temperatures cool. Homeless animals can’t survive the cold, dark nights alone. Just like Zuko, they have to be saved. And you can save them by giving today.