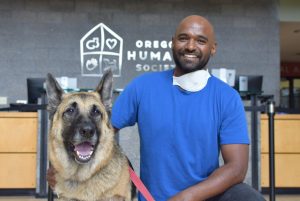 One bright spot in the coronavirus pandemic has been the huge interest in pet adoption and fostering. As people began to shelter in place, they were looking for a way to make a difference in their community. When OHS put the call out for emergency foster homes, Jason Kallingal was ready.

He’d been thinking about adopting a dog for a while and would often check out the pets needing homes on the OHS website. When his two restaurants, Life of Pie, were forced to temporarily close, Jason knew the timing was right and he was willing to help. 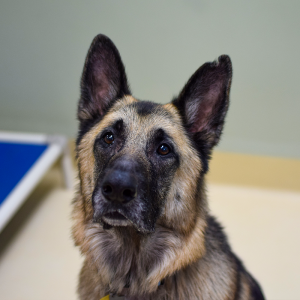 Sancho had been in the shelter for more than six months and, sadly, it was his third time back at OHS. Life in a shelter was very tough for him – being around other dogs was stressful, his skin was raw and irritated, and he spent his days pacing in his kennel and barking. Everyone had a soft spot for Sancho and he became a staff and volunteer favorite. He went on multiple walks per day, played fetch every morning in Manners Hall, was part of the OHS running team and got lots of TLC. Sancho needed a break and, oddly, he got one when coronavirus hit. As adoptions moved to appointment only and efforts were made to reduce animals on-site, Sancho was selected to go to foster care. But it would take a special person to care for his unique needs. Sancho needed lots of training, consistency and special food to help his skin allergies.

“I was nervous to foster him at first,” says Jason. But in late March, Sancho went to this temporary home with Jason. Virtual consultations with OHS trainers helped Jason understand and manage Sancho’s stress around other dogs. “I had no idea OHS provided so much support.”

OHS Training and Behavior Manager Tanya Roberts worked with Jason and Sancho and was impressed with how quickly the two fell into a rhythm. “Jason was so open to learning and that really helped him understand what Sancho needed to be successful”

“It’s been really rewarding to train him,” says Jason. “We’ve developed a strong bond over the last few months.”

On June 10, Jason made it official and adopted Sancho. The adoption was livestreamed on OHS’s Facebook page and employees in masks applauded from six feet away as the pair left the shelter.

When Jason was asked what surprised him the most about Sancho, he replied “he’s really intimidating looking, but he’s a big baby.”