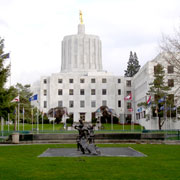 Representatives from OHS and other animal advocates testified in favor of five bills to strengthen animal cruelty laws during a special March 29 hearing by the Oregon House Judiciary Committee.

To watch a recorded video of the hearing, visit the Oregon Legislature’s website here »

The five bills discussed at the March 29 hearing were:

Permits forfeiture of all seized animals. This bill clarifies which animals are eligible to benefit from a pretrial remedy available to prosecutors and animal care agencies so that they will not be stuck in a legal limbo until trial. Full text and more: Oregon Legislative information »

Case Study: In 2013, the Investigations Department served a search warrant on a property in Rainier and seized over 100 dogs and 21 horses. Evidence of animal neglect was collected and turned over to the District Attorney’s Office to file charges. The prosecutor charged the defendant with 48 counts of animal neglect; each count referenced a specific animal that was seized during the execution of the search warrant, but not ALL of the animals seized with the warrant were mentioned in the prosecutor’s charging document.

The dogs and horses that were not associated with an animal neglect charge sunk deeper into a legal limbo. They could not be returned to the owner because they would be contraband in her possession based on her release order conditions. They, potentially, could not be forfeited to OHS because the statute was relatively ambiguous as to whether only animals included in charges were eligible for forfeiture. Ultimately, the judge determined that ALL animals seized in that case were eligible for forfeiture, but the fact that it was not clearly outlined in the statute resulted in additional legal proceedings equating to a delay in the determination of the outcome for the neglected animals.

The fate of animals in protective custody should not rely solely on a judge’s estimation of legislative intent from years prior but rather clear language in the statute itself that is universally applied by justices across the state.

Creates Animal Abuse in the Third Degree. Under current law, a person cannot be convicted of animal abuse unless the person causes physical injury to the animal. This bill creates the crime of animal abuse in the third degree. The bill states that conduct that creates a substantial risk of causing injury to an animal is abuse. Full text and more: Oregon Legislative information »

Case Study: In December of 2015, OHS received footage taken by a home security camera of a man walking a husky puppy down a sidewalk. As the puppy was moving along on the leash, the individual with control of the leash abruptly and violently pulled on the leash thereby propelling the puppy through the air, over his head, and onto her side. This behavior resulted in the dog flying at least 4 feet in the air, and slamming down hard onto the ground on her side on the grass. He then forced the puppy to stay on the ground using his hands, and held the puppy down on her side.

At one point, and in another instance, the individual pulled the puppy off her feet again (by the leash attached to the collar) and slammed her down on her stomach on the curb of the sidewalk. The dog did not receive an immediate vet exam and by the time OHS was called in to assist and examined the dog, no injuries were noted. The prosecutor could only charge the individual with Attempt rather than Animal Abuse for the sole reason that there was no evidence of injury to the dog.

Under current Oregon law, a judge may order the seizure of chickens alleged to be used for cockfighting. Since only male roosters are used in the actual fights, the female hens and chicks at cockfighting breeding operations cannot be seized. This bill would allow the seizure of the female hens and chicks being raised with the intent to be used as fighting birds. Full text and more: Oregon Legislative information »

Case Study: In 2015, OHS assisted several federal and local agencies with the execution of multiple search warrants on properties in Washington County where drug use and cockfighting were suspected. Over 1,000 birds, primarily roosters, were discovered at one of the locations. A local judge issued an order that the fighting birds be seized but there was nothing in the law to allow for the seizure of the young chicks that grow up to become fighting birds or the hens used to produce the chicks. Ignoring the connection between the hens and the chicks in the blood sport of cockfighting allowed the suspects who had fled the scene to return and collect those birds, thus ensuring that this crime perpetuates around the state.

Case Study: In November of 2016, a humane investigator responded to a report of an exotic bird being kept in a cage on the balcony of an apartment in cold temperatures. When the investigator responded she found the bird on the balcony as reported. The cage was enclosed completely in plastic with very little ventilation. The investigator noted that the cage was dirty and had not been cleaned in over a week. This case is just one example of the numerous reports the investigations department receives every year regarding improperly-cared-for exotic birds. The owners of the birds almost always refer to them as their pets. Exotic birds have very specific and nuanced dietary and husbandry needs, and therefore deserve to benefit from the enhanced minimum care requirements extended to animals that are categorized as “domestic” and not fall into the category of “livestock” that less-accurately depicts their status in our community.

Increases possession ban for felony neglect and allows groups to fundraise. This bill extends the ban on possessing animals for those convicted of felony animal neglect from five years to fifteen years. In addition, the bill adds provisions to existing statutes acknowledging that the organizations incur costs when providing care to seized and impounded animals. The provisions state that these organizations can address those costs by seeking funding that is additional and separate to any costs a court may order a defendant to pay when convicted. Full text and more: Oregon Legislative information »

Case Study (fundraising): OHS is the only organization in the state with the expertise and the capacity to take on large-scale animal cruelty cases, all of which is made possible by donors who give generously year after year. In 2013, OHS assisted the Marion County Sheriff’s Office in rescuing over 100 starving dogs from a warehouse in Brooks. To restore that population of animals to good health cost well over $200,000. That same year, OHS assisted Columbia County with a cattle neglect case that resulted in the expenditure of hundreds of thousands of dollars as well. To date, OHS has not received any money from any of the five defendants associated with these two cases. OHS relies solely on the generosity of its supporters to continue to be able to come to the aid of law enforcement agencies who uncover widespread animal cruelty. The individuals and foundations who donate to OHS do so because they care deeply about the mission of the organization and for all of the animals who benefit from what OHS has to offer. They do not donate to offset the amount of money a convicted defendant has to repay OHS. The financial contributions to OHS should not be a factor considered by the court when determining the amount of money a defendant is required to repay. That individual should have to repay the full price of the cost to take care of the animal(s) s/he victimized.

Case Study (possession): A few years ago, the State of Oregon took a stand against large-scale neglect and made it a felony offense when more than eleven animals are subjected to the neglect. One of OHS’ first cases eligible for this charging enhancement was a dog breeder in Jackson County. OHS responded to a request for assistance from Jackson County Animal Services to investigate dogs and birds kept in poor conditions in Applegate, Oregon. A search warrant was executed and OHS seized 51 dogs and 12 exotic birds from the property. Dogs and puppies were found living in wire bottom kennels without bedding, and suffering from significant medical conditions that had gone untreated. The suspect was charged with 58 counts of felony animal neglect and was ultimately convicted of multiple felony counts of neglect. Despite the seriousness of her offense, based on how the current laws are written, she was only banned from possessing animals for 5 years. If HB 3283 passes, then she would automatically be subject to a 15 year possession ban.

Please contact your elected officials to let them know your opinion about these bills. To learn who represents you and how to contact them, visit Find Your Legislator. You can also make a toll-free telephone call to your legislator at (800) 332-2313. If the legislature is not in session, you may need to call their direct number (available through Find Your Legislator).»

One Response to “OHS Testifies Before Judiciary Committee on Five Bills”