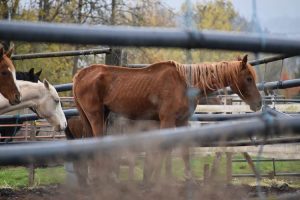 At the request of Lane County, the Oregon Humane Society’s Investigations team assisted with a case involving more than 60 horses suspected of suffering from severe neglect at a facility near Creswell, Oregon.

The investigation began in mid-October when Lane County Animal Services received photographs of horses that appeared to be severely neglected and complaints from people who used to board their horse at the facility. This followed previous contacts with Animal Service in 2018 for not meeting minimum care standards.

Given the scope and scale of this case, Lane County reached out to OHS and Sound Equine Options for assistance. The OHS team was on scene to assist with the processing of evidence and provide other expertise as needed. Sixty-one horses were removed from the scene and are now being cared for by Sound Equine Options.

The Oregon Humane Society Investigations team works all over Oregon on nearly 1,000 cases per year, including assisting local law enforcement agencies. They rely entirely on donations for their lifesaving work.

Full press release from Lane County is below.

A total of 61 horses were removed from the Creswell property yesterday. The property owner, Gwenyth Davies, was arrested and cited in lieu of custody for Felony Animal Neglect in the Second Degree. This investigation is ongoing. We are extremely grateful for the support of all of the agencies and community members who assisted in this process.

Lane County Animal Services and Lane County Sheriff’s Office, along with numerous community partners, are in the process of removing several horses from a property located near Creswell, Oregon.

Initial investigation indicates multiple horses on the property are suffering from severe neglect. The decision to remove each horse will be made based on the condition of the animal in consultation with veterinarians.

Davies, who resides at the property along with her husband Michael DeLeonardo, has had previous contacts with Animal Services regarding horses in poor condition in 2018. As a result of those contacts, she complied willingly and the horses of concern were brought to minimum care standards. An additional report of neglect was made in September, however, information to support further investigation was not provided.

This current investigation began when Lane County Animal Services received photographs of horses that appeared to be severely neglected on October 16. The photographs were provided by Emerald Valley Equine Rescue after it received multiple complaints from people who used to board their horses with Davies.

Due to the large number of involved horses, Lane County quickly reached out to the Oregon Humane Society and rescue organizations to begin identifying partners who could help with the evaluation, removal, treatment and housing of so many large animals – which far exceeds local capacity.

“Ms. Davies is known to Animal Services,” said Lane County Senior Animal Welfare Officer Bernard Perkins. “While we typically focus on voluntary compliance and education, the level of alleged neglect and Ms. Davies’ history of violations goes far beyond what is acceptable in our community. We are grateful for the support of the Sheriff’s Office and District Attorney in the pursuit of criminal charges.”

Many of the horses will be transported to an alternate location for further veterinary examination and treatment. Sound Equine Options, a Gresham-based rescue organization, will ultimately transport horses to its facility near Portland.

Sound Equine Options, a 501(c)(3) non-profit organization was founded in 2009 to assist the growing number of neglected, abused and abandoned horses in our community. Its mission is to save the lives of horses through support, education, rehabilitation, training and adoption.