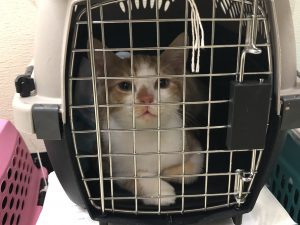 The call came in nine days ago.

Shelters in Los Angeles County were experiencing a huge influx of kittens – more than 100 per day in some areas. Nearby wildfires and a number of hoarding cases were pushing things to the breaking point. Jackson Galaxy, star and Executive Producer of the television show My Cat from Hell on Animal Planet reached out as part of his Operation Homeward Bound national initiative. Jackson has worked with OHS in the past and is a long-time shelter worker, animal advocate, and founder of The Jackson Galaxy Project.

There were already a number of transports of kittens coming in from other Oregon shelters and rescue partners planned for the week, so it took some creative thinking and a lot of teamwork to bring in these additional kittens in desperate need from Los Angeles County.

An adoption special to help current cats and kittens at OHS get adopted helped free up space. Kennels normally used for dogs were deep cleaned and modified to house kittens. Next came coordinating the list of feline passengers with the LA County shelters. The final group destined for Portland included kittens that were ready for adoption, a second group who needed spay/neuter surgery and a third group of nursing cats and kittens. Experienced OHS foster homes were recruited to care for the litters that needed more time before they were ready for adoption. 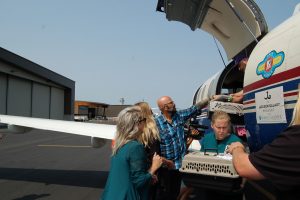 On transport day, the flight was right on time. The OHS team and transport vehicles assembled on the tarmac to meet the plane, piloted by Wings of Rescue. The 126 cats and kittens were welcomed to their new state then transferred from the plane to OHS vehicles in less than 15 minutes.

Back at the shelter, a group of volunteers met the OHS transport vehicle to unload and sort the new arrivals. The intake process took place in two different areas: Kittens who would be ready for adoption the next day in one screening room and the group that needed spayed / neuter surgery or were going to a foster home in another area. Volunteers helped move the kittens through the check-in process, prepared care packages for groups going to foster homes and cleaned dirty crates. Everyone was eager to help and have the chance to meet Jackson Galaxy. 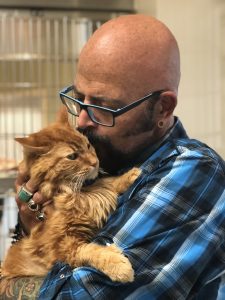 Since Jackson Galaxy has worked in shelters and he understands the challenges of caring for cats in a shelter environment, he wanted to have some time with the OHS staff and volunteers to answer questions and discuss enrichment tools and techniques.

During his brief time at OHS, Jackson also met with two adult cats who have been at OHS for a while, waiting for their forever home. Tylor, a 10 year old brown tabby, and Oliver Nacho, an 8-year-old red tabby, received some special snuggle time with Jackson and additional publicity during a Facebook live post.

The entire intake process was completed in 90 minutes – an amazing achievement. The planning, preparation and teamwork paid off. Most importantly, 126 feline lives have been saved and will soon have forever homes.