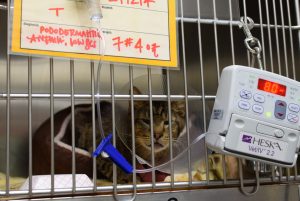 Barry Manilow is famous at the Holman Medical Center at OHS, but not for the reasons you might think. This beautiful brown tabby cat suffered from a rare case of extreme pododermatitis, or pillow foot. His paw pads were swollen, raw and bloody.

Barry came to the Oregon Humane Society through the Humane Law Enforcement department as part of a hoarding case. Cases like this are not uncommon and demonstrate OHS’s commitment to working with partner agencies to help connect people with social services, while helping animals begin a new life.

Barry had been living in extremely unsanitary conditions, and it was thought that his pododermatitis was exacerbated from walking on filth. He was among a dozen cats who were rescued and needed care before being ready for adoption.

But Barry’s case was different.

Treating his feet was challenging and he needed time in a foster home while treatment options were tested. OHS foster parent, Molly Hunt, agreed to care for him. It was a difficult and often messy assignment. Barry’s feet were persistently bloody so Molly would follow him around with a cloth when she let him outside his confined space. Molly discovered that Barry enjoyed snuggling and being pet. He even began playing with toys while he was with her.

After a week, Barry’s feet were not responding to any treatment — in fact, they got worse.  He also began to lose his appetite, which worried Molly. She contacted the medical team and Barry came back to OHS. Barry’s painful feet continued to be challenging, so OHS vets consulted with a veterinary dermatologist. Barry’s next steps included intense inpatient treatment and surgery. With the painful growths removed, Barry continued to improve. For his recovery, he was moved to another foster home since Molly was out of town.

Molly was deeply moved by her experience caring for Barry. She writes, “I had Barry with me for a mere six days, but his will to thrive will remain in my heart and mind forever. Despite his terrible experiences, unending pain, and life in a hopeless situation, he was ready to change and learn. His love (and curiosity) overcame the ordeals of his past. I am so thankful to OHS for giving ones like Barry a new chance and a better life.”

UPDATE: BARRY MANILOW HAS BEEN ADOPTED.

** Warning: Some of the images below may be graphic to some viewers. **