Young Musicians Use their Talents to Help Wildfire Victims 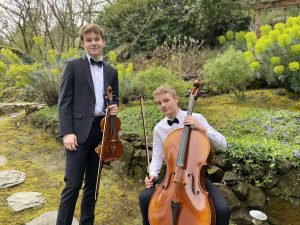 As the wildfires blazed across Oregon in early September, George and Henri Danzelaud were eager to help. The brothers have a passion for animal welfare and they looked for a way to help people and pets affected by this unprecedented disaster.

These dedicated young men have already been involved in other projects to help animals over the years. They’ve helped advocate for legislation; volunteered their time at shelters; collected donated pet food, and cleaned stalls and pastures; moved hay bales; and built horse pens at a horse and donkey sanctuary.

They decided to raise money for the Oregon Humane Society after they learned that OHS had been deployed all over the state to deliver supplies, move pets from local shelters in fire zones, and care for stray and owned animals.

In addition to their penchant for philanthropy, they have another extraordinary talent. George and Henri are both accomplished musicians. George, age 17, has performed as a soloist violinist at Carnegie Hall and wrote/published three songs after teaching himself the guitar. Henri, age 14, a talented cellist, was accepted and performed at NW Quartet Fest and also OMEA All-State Orchestra where he was 2nd cellist. He is also a piano player.

The pair decided to host a virtual fundraising concert for the animals. They set up a donation page and put together a beautiful program of five songs from a variety of genres.

Their inspiring music captured the attention of their animal-loving fans. More than 300 people tuned in for their concert and they raised $5,500 for the Oregon Humane Society.