OHS donates approximately 60,000 pounds of pet food to shelters, rescues and food pantries around the state.

In late April, the Oregon Humane Society launched a state-wide effort to distribute pet food to shelters, rescues and food pantries in communities in need. The project was initiated in response to the economic hardship brought on by the COVID-19 pandemic. Thirty-eight days later, OHS has driven 10,085 miles, delivering approximately 60,000 pounds of pet-food in 39 deliveries to 29 counties around Oregon.

OHS mobilized shelter staff to coordinate logistics and deliver the pet-food. Vehicles normally used for transporting pets were transformed to hold the large pallets of food. When the first three vehicles left the shelter on April 21, there was a feeling of excitement in the air – help was getting to people and pets when they needed it most. It had almost been a month since the stay-at-home order was put in place to fight COVID-19 and the number of people losing their jobs was skyrocketing.

Tyler Norby from OHS’s Admission Team delivered pet-food to numerous shelters and food pantries across the state. He found it rewarding to share resources with communities in need. “This project is a great way to shake hands (from six feet away) with communities that are a great distance from us and let them know that we are all in this together,” he says. 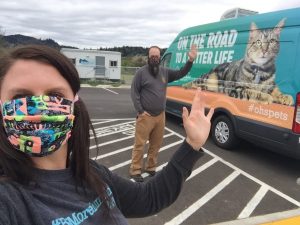 Some delivery sites, like Greenhill Humane Society in Eugene, were a distribution point for smaller local rescues and food pantries. Multiple deliveries have been made to Greenhill since there is a huge need for pet food in the surrounding areas.

OHS Second Chance Coordinator Chris Hoffman was particularly touched by some of the stories he heard from the communities where he delivered pet food. “You often hear that those with animals will feed their animals before feeding themselves,” says Chris. “But when you hear it from someone on the frontlines of this effort to help feed the hungry, it takes on an entirely different meaning.”

One the road to Coos Bay, Tyler was reminded of the love people have for animals when he stopped at a grocery store in Reedsport. “A gentleman walked up and approached the van after noticing the OHS logo on the side and handed me $20 to help shelter pets. He told me that before his war tour many years ago, he worked at a shelter, so he knows how hard it can be. I honored his wishes and accepted his donation, along with thanking him profusely.”

Approximately half of the pet food delivered by OHS was supplied by a donation from GreaterGood.org. The rest came from local suppliers, Phillips Pet Products, Amazon, FedEx and generous individuals. There are plans to continue delivering food around the state as communities continue to deal with the fallout of this pandemic.

“We know this has been a challenging time for so many people around our state,” says Sharon Harmon, OHS President and CEO. “Our hope is that we have alleviated some of the stress for pet-owners and shelters by giving them the food they need to care for their animals.”