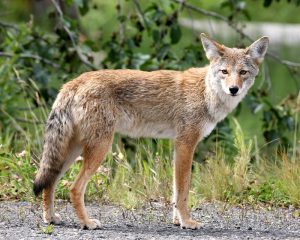 Oregon’s wildlife is managed for the benefit of all Oregonians, present and future. HB 2728 would prohibit gruesome coyote killing contests, which have occurred throughout Oregon over the past few years. These contests offer cash prizes and/or guns for the winner who kills the most, the largest, or the smallest coyotes within a certain time-period.

Washington State, Colorado and five other states have prohibited killing contests, and it’s time for Oregon to do the same. Motivated by financial rewards, these contests are grossly out of step with the ethics of fair chase, modern, science-based wildlife management, and Oregon’s conservation centered values. Cruel and callous coyote killing contests send a message of disregard for wildlife rather than of sportsmanship, good stewardship, and respect for the public’s wildlife. HB 2728 is a matter of ethics and ethical hunting of Oregon’s wildlife. In fact, a recent poll by the Remington Research Group found that a strong majority of Oregonians, in all five congressional districts, support legislation to ban coyote killing contests. The Statesman-Journal also supports a ban, editorializing that “Oregon doesn’t need coyote-killing contests.” Moreover, coyote killing contests are not supported by science-based wildlife management principles. Numerous studies, including those cited in Oregon Small Farm News, an extension of the Oregon State University, underscore that science does not support indiscriminate, largescale, mass killing of coyotes as an effective means of reducing coyote populations, minimizing conflicts with pets or livestock, or increasing numbers of game species. It can even lead to an increase in coyote numbers by disrupting stable family packs and increasing their rate of reproduction.

Do these contests really happen in Oregon?

Yes. This issue came to light in December 2018 when a contest was held in Harney County in which participants competed for prizes for killing the most coyotes, judged by the cumulative weight of their dead bodies. More than nine such contests have been held in our state in recent years, most recently in January 2021 in Southeastern Oregon, where more than 272 coyotes were killed over a two-day period for the chance to win cash and prizes.

Does this prohibit the use of lethal control to manage predatory animals like coyotes?

No. This bill does not impact the current laws related to taking predatory animals. Specifically, per ORS 610.105, “Any person owning, leasing, occupying, possessing or having charge of or dominion over any land, place, building, structure, wharf, pier or dock which is infested with ground squirrels and other noxious rodents or predatory animals, as soon as their presence comes to the knowledge of the person, may, or the agent of the person may, proceed immediately and continue in good faith to control them by poisoning, trapping or other appropriate and effective means.”

If coyotes are already killed year-round in Oregon and without regulations, what is the concern with killing contests?

The sole purpose of killing as many animals as possible for cash, prizes and entertainment violates Oregonians’ humane values and the spirit of traditional hunting ethics and damages the reputation of Oregon’s sportsmen and sportswomen.

Unfortunately, there is a longstanding statute (ORS 496.162(3) that prevents the Commission from prescribing limitations, restrictions, or prohibitions on the taking (e.g., killing) of predatory animals (and coyotes are defined as predatory in Oregon law). We urge Oregon state lawmakers to follow in the footsteps of Washington, Colorado, New Mexico, Arizona, Massachusetts, California & Vermont who have already banned wildlife/coyote killing contests by passing HB 2728.

What You Can Do

Contact your state representative and state senator to encourage them to vote yes on HB 2728! Look up your legislator here and take the following steps: