On June 22, a new Oregon law took effect that expanded protections for children and pets left alone in vehicles. The law shields members of the public from damages if they break into a car to save the life of a pet or child. This blog is the story of how the law came into play in downtown Portland the day after it was passed.

Shawna Harch’s hands were bleeding from smashing the car jack against the passenger window of the black Mercedes-Benz. The car jack–a diamond-framed mass of heavy metal with a threaded steel rod down the center—was strong enough to support the entire weight of a car when changing a tire, but it bounced off the car window with no result. After six or seven swings with all her strength, Harch was tired, hurting and on the verge of tears.

In the back seat of the car was a tiny tan and white dog, a Pomeranian-Chihuahua mix that looked to weigh about seven pounds. The dog was panting frantically and showing signs of heat stroke. The temperature in downtown Portland was 90 degrees, as the city was entering the first day of what would be a brutal three-day heat wave. All four windows of the Mercedes sedan were rolled up tightly, with only a one-inch gap around the sunroof offering ventilation.

A Life in Danger

Having worked at a veterinary clinic, Shawna knew that temperatures inside a parked car can rise dramatically in as little as ten to 20 minutes on a summer day, putting pets at risk of a fatal heat stroke. A window that is rolled down just one or two inches offers little relief.

In the back of her mind, Harch remembered hearing about a new Oregon law that shielded people from being sued if they broke into a car to save the life of a pet or a child. “As I was trying to break into the car, a woman actually stopped and told me the law had just passed yesterday,” recalled Harch. “That’s great, I thought, but I need to break the window anyway. I would not be able to live with myself if I walked away with the dog in distress.”

Harch had already tried to locate the car’s driver by going door to door, asking shop owners on the busy street in Portland’s Pearl District if they or any of their customers knew who drove the car.  After coming up empty-handed, she called the Portland Police. The police told Shawna they would send an officer, but were unable to estimate how long it would take before someone arrived.

Still hoping to find the owner, she attempted to trigger the car’s alarm. “I was kicking the tires and banging on the windows to try to set off the alarm. That didn’t work. I even tried to get in through the moon roof.” Finally, she opened the trunk of her own car and retrieved a car jack, an expanding scissors-like device used to raise a car high enough to change a tire.

After failing to smash the window with the car jack, Harch asked for help. A passerby told her that hitting the window in the center of the glass would never work, and that she instead had to strike at the window’s most vulnerable point: the corner.

Her first swing at the corner was a success. A small opening was smashed out and Harch enlarged the hole with additional swings until she could reach inside and open the door. She quickly removed the dog, who was panting at an alarming rate and appeared to be under extreme distress. Workers from a nearby restaurant had seen Harch breaking into the car, and they brought over a tub of water so Harch could immerse the dog and reduce its body temperature. The dog was finally out of danger.

The Portland Police soon arrived, as did the owner of the car and the dog. The police advised the dog’s owner to take his pet to a veterinarian immediately. “They also told them about the new law and that I was a good Samaritan trying to help the dog. They told them the car’s owner was responsible for the damage.” To Harch’s surprise, the owner of the vehicle was not angry and  thanked Harch for saving the dog.

Harch has never seen the two men again, and hopes they did take the dog, which seemed to have recovered, to a veterinarian. “I’m very relieved I didn’t have to go to court, and I am really grateful for the work that the Oregon Humane Society did in pushing for this law. You really empowered me and everyone else to do the right thing. Hopefully, if this happens enough, people will stop leaving dogs in cars.”

About the New Law

The public, as well as police, can break a car’s window to rescue a pet or child in imminent danger without the risk of being sued thanks to a new Oregon law, HB 2732. Breaking a window is a last resort: before someone breaks a vehicle window, law enforcement must be contacted. Additionally, rescuers must stay with the animal until first responders arrive or the owner of the car returns. For more information on the new Oregon law and how quickly a car’s temperature can rise to a dangerous level, visit the OHS website at: oregonhumane.org/hot. 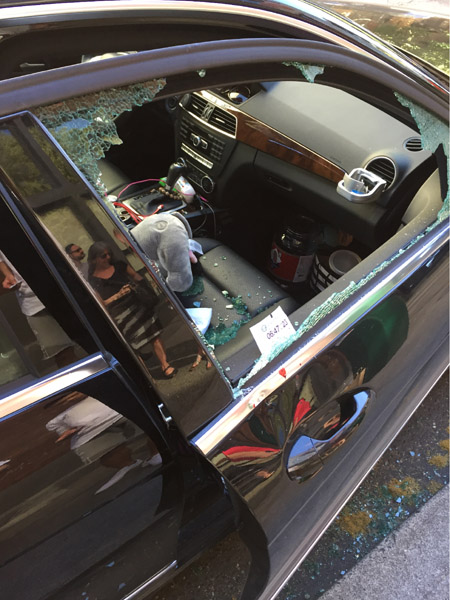 It took many tries to break the glass window. 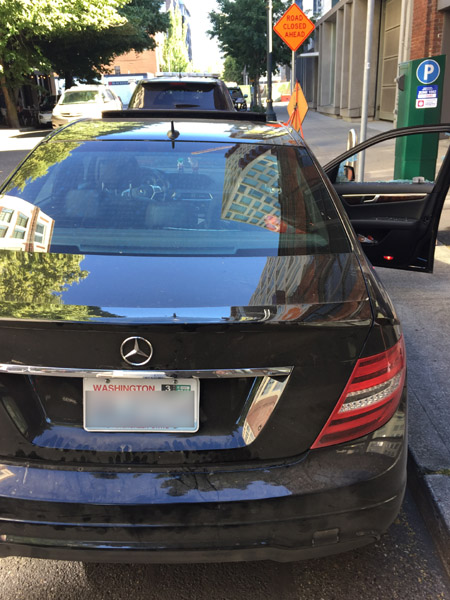 The sedan was parked in Portland’s Pearl district. 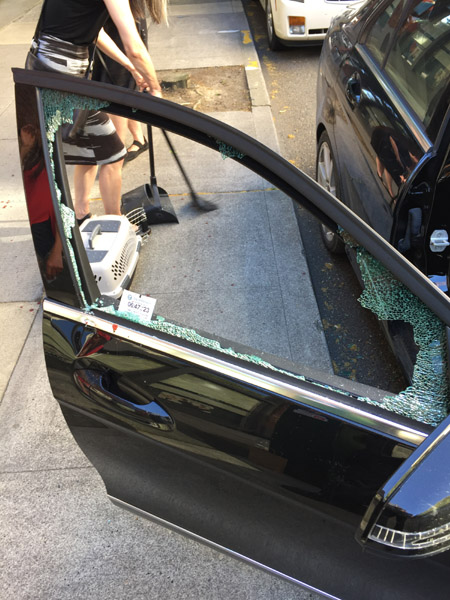 Rising temps can be lethal to pets trapped in cars. 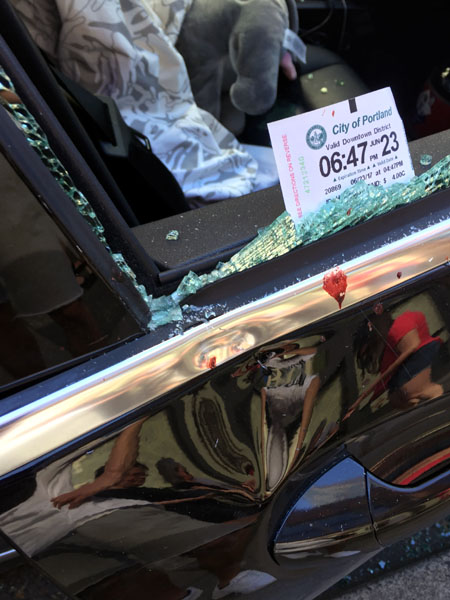 Blood from Harch’s hand is visible on car. 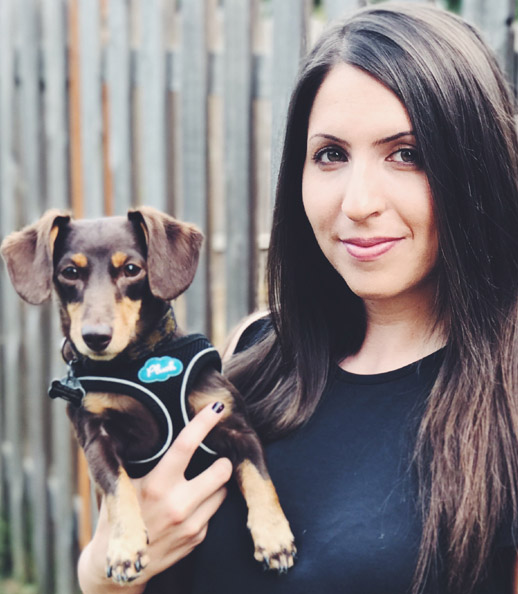 Shawna Harch with her dog, Watson.