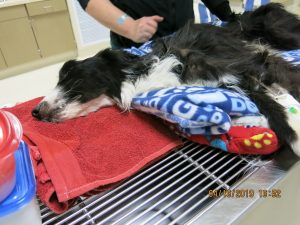 When Ziggy arrived at OHS, he was clinging to life. He was emaciated, lethargic and unable to stand. The only movement he was able to make was a soft blink with his eyes.

Ziggy’s owner brought him to OHS seeking emergency help, but something didn’t seem right. The OHS investigations team was alerted and the medical team was quickly assembled to treat the fragile border collie. At 21 pounds, Ziggy was less than half the normal weight for a dog his size. After a thorough exam, it was determined that he had been chronically starved.

Ziggy’s owner was cited for animal neglect in the first degree.

“Ziggy’s condition was truly horrifying and heartbreaking,” says Dr. Emily Ferrell, OHS veterinarian. “We could see he still had a glimmer of life in him and we were determined to do everything we could to help him survive and thrive.”

Recovery would be a slow process. Ziggy received a blood transfusion and was placed on a re-feeding plan as he slowly gained strength and learned to walk again. He spent two months in the medical center at OHS so he could be closely monitored. This was an extraordinary amount of time for a pet to be hospitalized, but Ziggy’s condition was still considered critical.

“The first time he walked on his own, everyone on the medical team celebrated,” added Dr. Ferrell.

Ziggy was then placed in a foster home with an OHS veterinarian where he continued treatment and physical therapy. As he began to feel better, his personality started to emerge. True to his breed, he loved toys, and would focus on playing ball for hours. 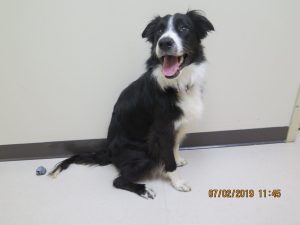 Today, he is smart, intense and loves to herd his toys and family. He was adopted by a member of the OHS medical team who bonded closely with him during his treatment.

On Jan. 31, Ziggy’s former owner was convicted of animal neglect in the first degree. Her punishment includes one year probation, community service and a five year ban on owning a domestic animal.

“We are very grateful to our Investigations team and to the Multnomah County District Attorney’s Office for helping to bring justice for Ziggy,” says Sharon Harmon, OHS President and CEO.

The OHS Investigations team works all over Oregon on nearly 1,000 cases per year, including assisting local law enforcement agencies. They rely entirely on donations for this lifesaving work.

Today, Multnomah County District Attorney Rod Underhill announced that 32-year-old Brianna Curry-Neal was put on one year of formal probation for chronically starving her dog to the point of near death.

Under Oregon law, a person commits animal neglect in the first degree when they intentionally, knowingly, recklessly or with criminal negligence, fail to provide minimum care for an animal in their custody and the failure to provide care results in serious physical injury or death to the animal.

This investigation started on April 16, 2019 when Curry-Neal walked into the Oregon Humane Society with her five-year-old border collie named “Ziggy” wrapped in a blanket. Curry-Neal immediately told the front desk staff that her dog needed emergency help.

Ziggy was unable to move any other part of his body besides his eyes because he was so weak. He weighed 21 pounds and was near death due to his emaciation.

X-rays showed that Ziggy’s body had broken down all of his fat and so much muscle that his heart was one-third the normal size, which medical experts testified to be consistent with chronic malnourishment and suffering.

Ziggy required more than 30 days of intensive care at the Oregon Humane Society.

“Without the immediate intervention and attention of the medical team at the Oregon Humane Society, there is no doubt that Ziggy would have died. Staff remained well past closing time on April 16 to provide Ziggy’s initial six hour resuscitation,” said Multnomah County Deputy District Attorney Clayton Jacobson, who prosecuted this case. “While in the care of the Oregon Humane Society, Ziggy received intravenous fluids, a slow re-feeding plan, a blood transfusion and physical therapy from more than 20 Oregon Humane Society staff members. Today, Ziggy is happy, healthy, and thriving.”

During the investigation, the Oregon Humane Society’s Investigations Department learned Curry-Neal had owned Ziggy her entire life. Curry-Neal told investigators conflicting stories about her care for Ziggy, including that when Ziggy stopped eating she attempted to give him activated charcoal, which a friend of hers recommended. She later said that she was providing Ziggy with an abundance of food.

The state called an expert witness who testified, if true, Ziggy would have been obese instead of emaciated.

This is an appropriate sentence that takes into account the aggravating factors as well as the mitigating factors the District Attorney’s Office came to learn during the litigation of this case.

Ziggy is now under the care of an adopted family.