How a kitten without eyes brought a family together 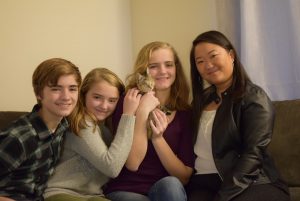 Hours before the sun came up, Alanna Lundin and her three children arrived at OHS and began to wait. They knew they needed to arrive early if they wanted to have a chance to adopt the sweet little blind kitten named Ilene that been featured on the news.

Alanna is no stranger to helping pets in need. For the last nine months, her family has fostered dozens of kittens and puppies who were not quite ready for their forever home. “We’ve taken care of bottle babies, puppies recovering from surgery, and animals that are too young to be at the shelter,” says Alanna.

But there was something special about Ilene.

“When we saw her story on the news, it broke our hearts,” adds Alanna.  “The kids were the ones who decided that we needed to adopt her. They wanted to shower her with love and give her a family.”

Alanna and her teenaged children were also drawn to Ilene because they understood how being part of a loving family could help heal the deepest wounds. 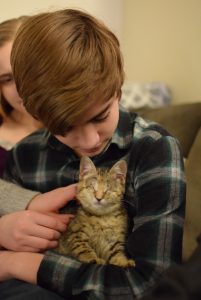 Three years ago, Alanna was introduced to her then foster children. The three siblings, age 10, 11 and 14 had been the victims of unthinkable neglect. But Alanna was determined to help them overcome their painful past and start a new chapter. With love, patience, the help of experts and the support of Alanna’s community, the children began to transform.

Alanna thought the family might benefit from having a pet in the family, but decided that fostering would be a great option. “I wanted to teach the kids and show them how we love animals and people,” says Alanna. She credits their experience as an OHS foster family as the catalyst for helping the children blossom.

“Fostering the animals brings them so much joy,” notes Alanna. “OHS has helped us become a family. It is a privilege that we are trusted with these baby animals. We learn a lot from them.”

Last month, Alanna adopted her three children who are now teenagers. Bringing Ilene into the family represents a special milestone for this new family. “This is the first time, as a family, that we have picked a pet to adopt,” notes Alanna.

When Alanna and her children finally had the chance to meet Ilene that Saturday morning, it was love at first sight. ““There were so many tears on the way home,” says Alanna. We were so excited.”

Ilene is settling into her new home and joins three other cats who were adopted from OHS. “Adopting this special kitten has been a good thing for all of us.”

This holiday season, your gift has the power to change a pet’s story. Plus, all donations will be matched up to $50,000, courtesy of the Willard L. and Ruth P. Eccles Foundation! 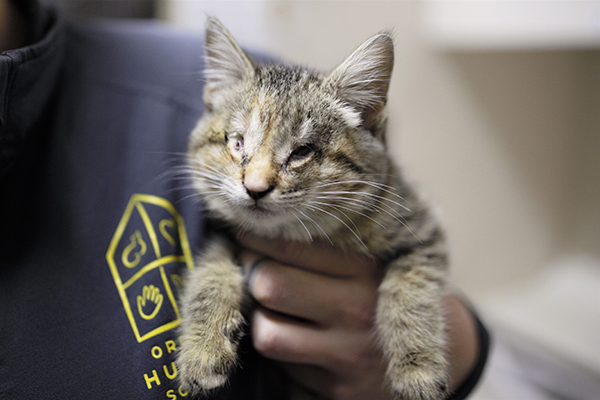 It’s hard to imagine the pain and fear this kitten endured. She was found soaked by the cold rain, wrapped in a bag in a pile of trash. A good Samaritan heard her cries for help, wrapped her in a t-shirt and brought her to the local animal shelter in Madera, CA.

The tiny kitten was named Ilene. Despite all she’d gone through, she started purring and soliciting affection the moment she was rescued.

While Ilene’s story began at a small, crowded shelter in central California, thanks to a partnership between the Oregon Humane Society, Madera Animal Services and PetSmart Charities, she was transported to Oregon. With the new Cat and Kitten Intake Center at OHS, the shelter is able to save more feline lives by accepting large transports of cats and kittens from underserved communities.

“When we got the call to help with Ilene, we immediately said ‘yes,’” says Mia Heaslet, OHS Second Chance Program Manager. “We are fortunate at OHS to have a great medical team who are well versed in unusual conditions.”

“It’s likely that she has a condition called microphthalmia in both eyes and was already blind,” says Dr. Maia Titcomb, OHS veterinarian. “This condition is usually caused by a congenital defect in cats, but can also be due to trauma or infection.”

Ilene received surgery this week to treat the eye area and prevent any future infections. “Not being able to see has not slowed Ilene down a bit,” added Dr. Titcomb. “She is a happy, playful kitten.”

Ilene was adopted on Saturday, December 14.

“The resiliency of this tiny kitten and the compassion of the people who saved her are inspiring,” says Sharon Harmon, OHS President and CEO. “The next step for this special feline is to spend the holidays with a new, loving family.”

This holiday season, your gift has the power to change a pet’s story. Plus, all donations will be matched up to $50,000, courtesy of the Willard L. and Ruth P. Eccles Foundation! 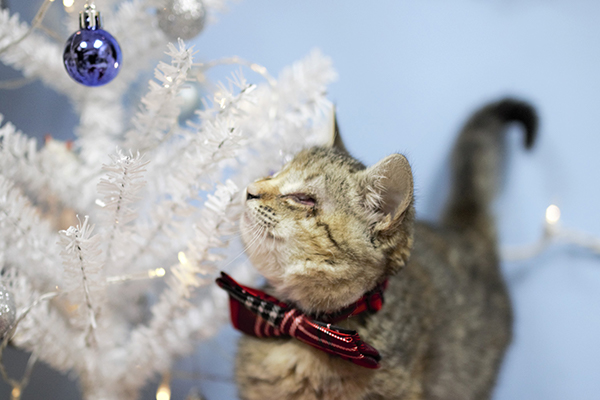 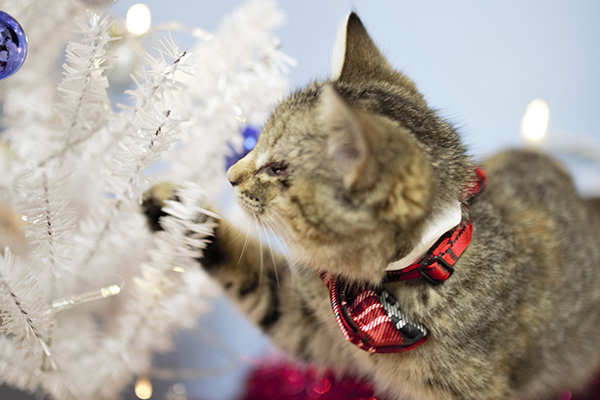 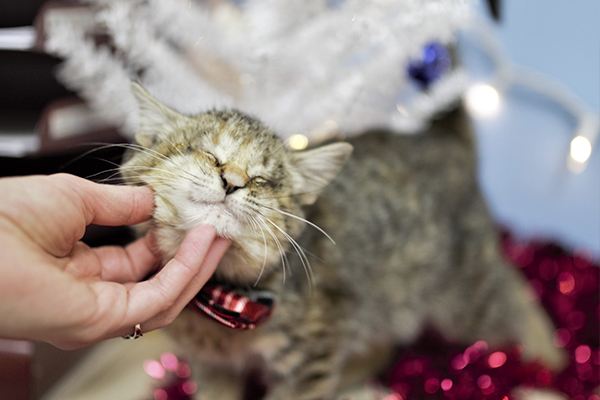 33 Responses to “UPDATE: Discarded in the Trash, Kitten without Eyes Gets a Holiday Miracle”