In spectacle that would have made Andrew Lloyd Webber and Lin-Manuel Miranda proud, hundreds of pugs—and their human companions—flocked to northwest Portland to participate in one of the nation’s largest gatherings of pugs, the OHS Pug Crawl, on May 21.

This event is a benefit for OHS and is sponsored and hosted by Portland Brewing Company. For the 17th annual event, held on a sunny Sunday afternoon, attendees were encouraged to dress in their favorite theatrical-inspired attire to celebrate this year’s theme: Pugs on Broadway.

The highlight of the event is the costumed pug parade, and there was no shortage of pugs in full Broadway regalia for this occasion. An estimated crowd of 1,700 people and 500 pugs strutted their stuff along the parade route outside the Portland Brewing Company Taproom.

Pug Crawl is a Portland tradition combining three ingredients prized by residents of the Pacific Northwest: dogs (specifically pugs), local microbrew beer, and helping shelter pets. While this year’s attendance didn’t quite match the draw of last year’s Star Wars-inspired theme, the event was nonetheless a success worthy of a standing ovation and raised more than $17,000 for the animals at OHS.

In what has become a tradition, Pacific Pug Rescue kicked off the parade with their own take on the musical Willy Wonka and the Chocolate Factory. Accompanying Mr. Wonka was a small army of Oompa Loompas and other characters. While there was no mistaking the distinctive snorts of parading pugs for the oh-so-catchy doompadee-do, one couldn’t help but adore the diminutive dogs for trying.

The sun never stopped shining on the cavalcade of pugs as they showed off costumes inspired by theatrical works, including classics like West Side Story and CATS as well as more recent plays like The Book of Mormon and Hamilton. References to The Color Purple and Wicked made appearances as pug owners pulled out all the stops to highlight their creativity and cherished canine companions.

The judging panel awarded first prize in the costume contest to Julie Brigham and her pugs Luna, Leeloo, and Piper who starred on their own mobile stage as Dreamgirls. Second place went to Terra Worel and Polly the pug, dressed in matching tuxedos as Fred Astaire in Puttin’ on the Ritz. Rounding out the top finalists were a fantastic float depicting Starlight Express (aptly changed to Puglight Express), and homages to the Sound of Music and Little Shop of Horrors.

OHS thanks Camp Computer for this fantastic video recap of the 2017 Pug Crawl!

Thanks to our volunteer photographers Ben Koker and Julia Schultz.

Tag your own photos #pdxpugcrawl – we’d love to see them, and you could be featured on the OHS social feed here » 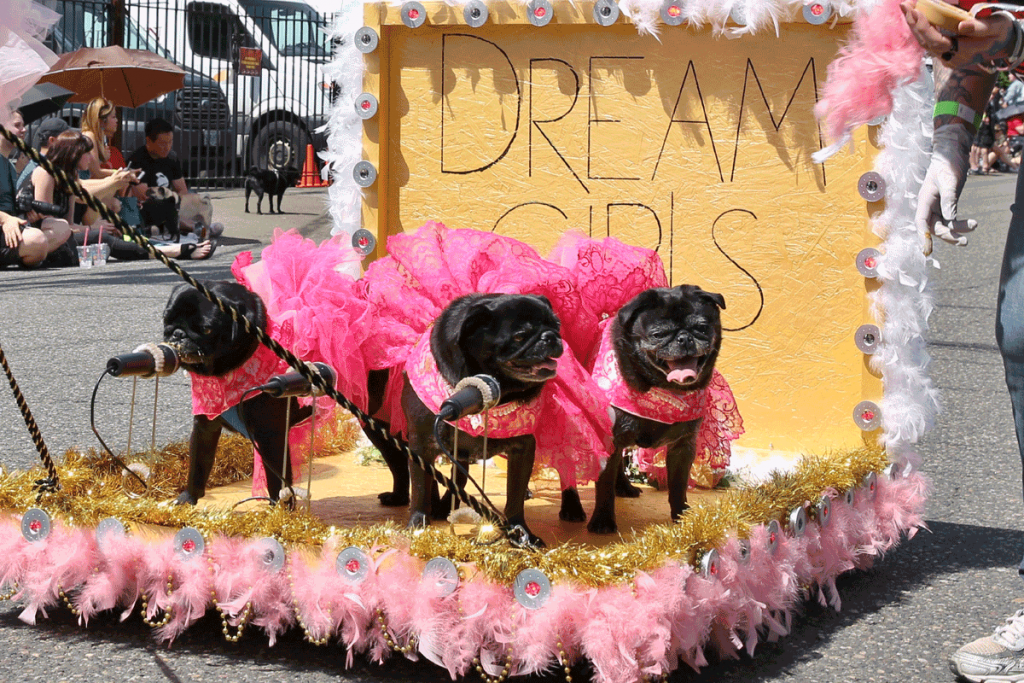 Dream Girls, who took first place in the costume parade. 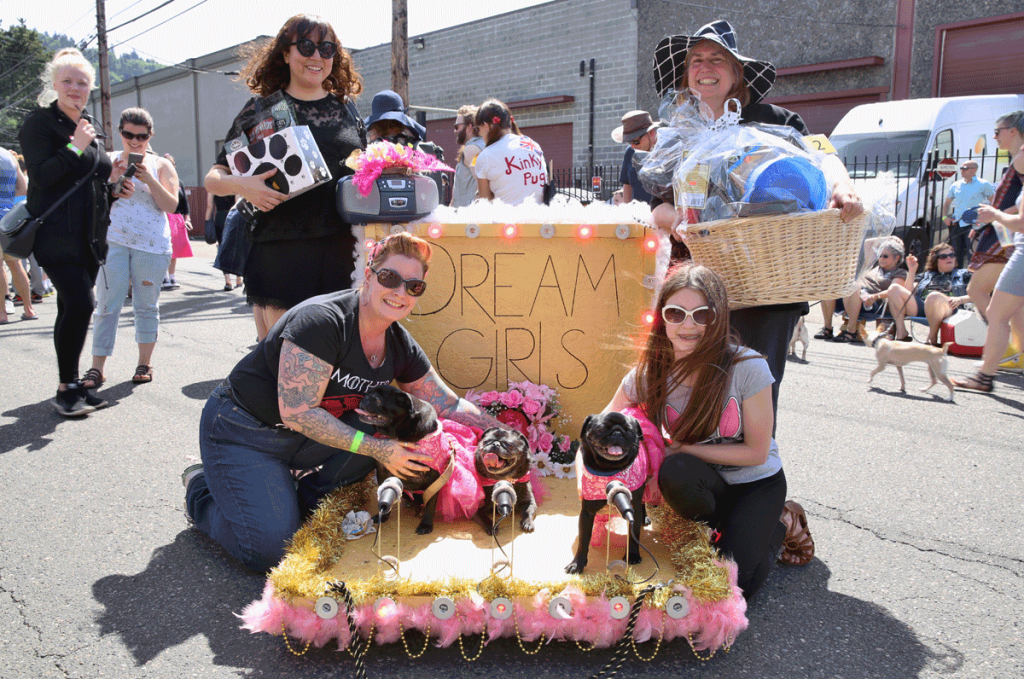 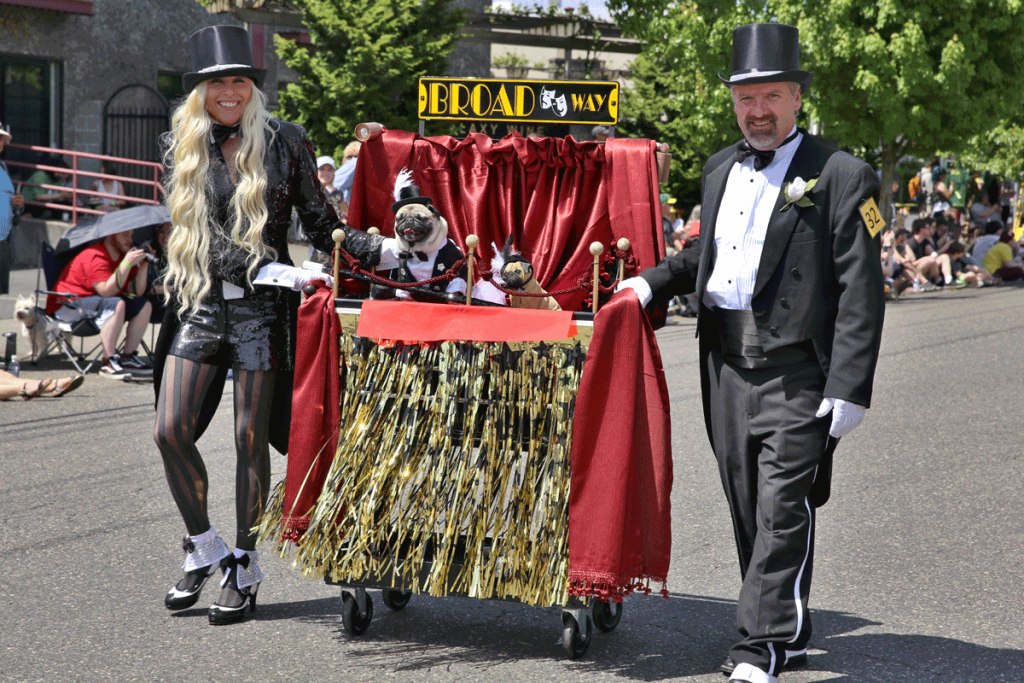 Puttin’ on the Ritz in the Parade of Pugs 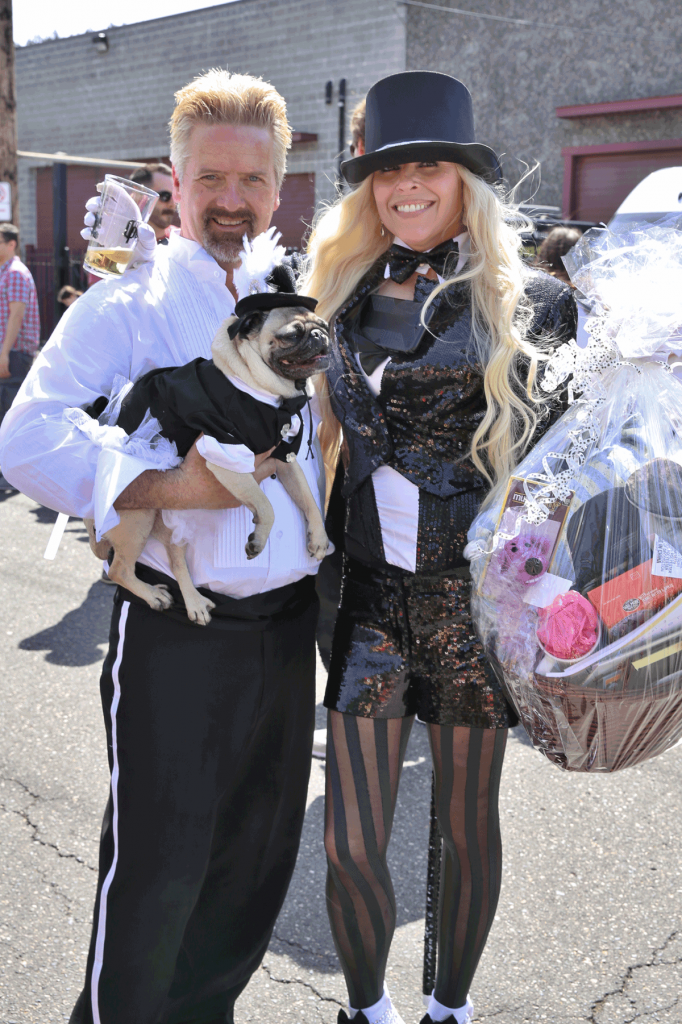 One part of the Pacific Pug Rescue group, which included Willy Wonka, CATS and Grease. 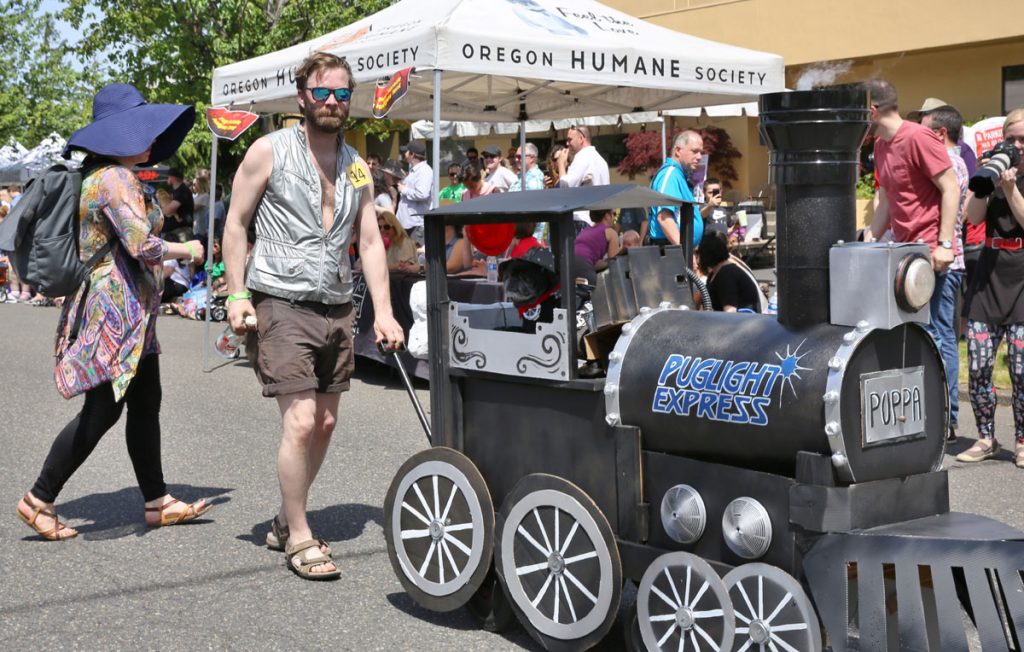 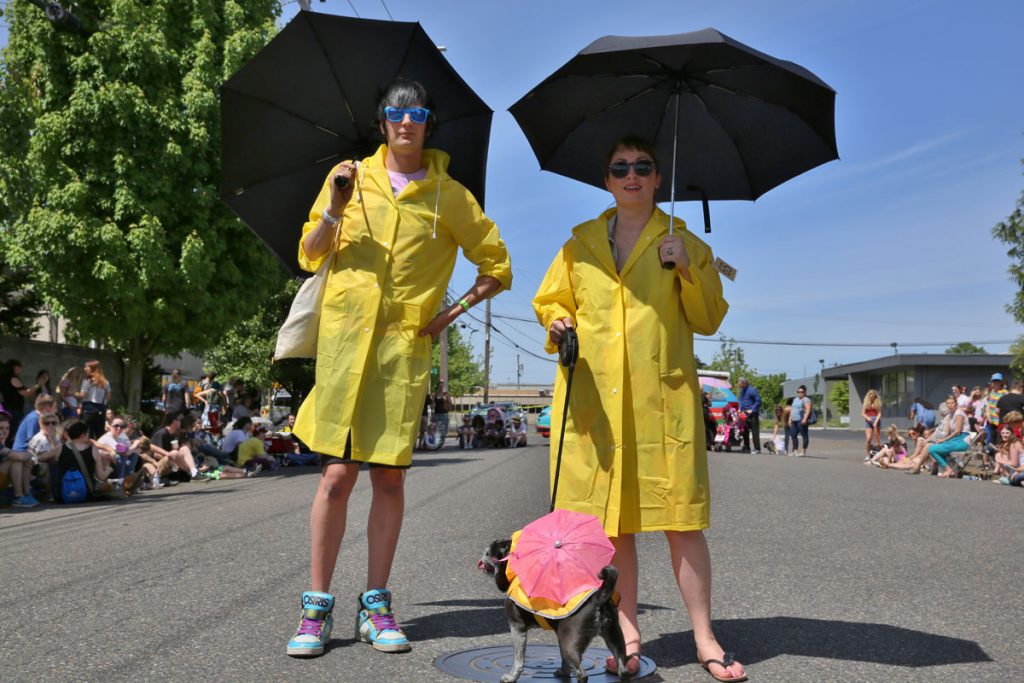 Pools for pugs on this warm and sunny day 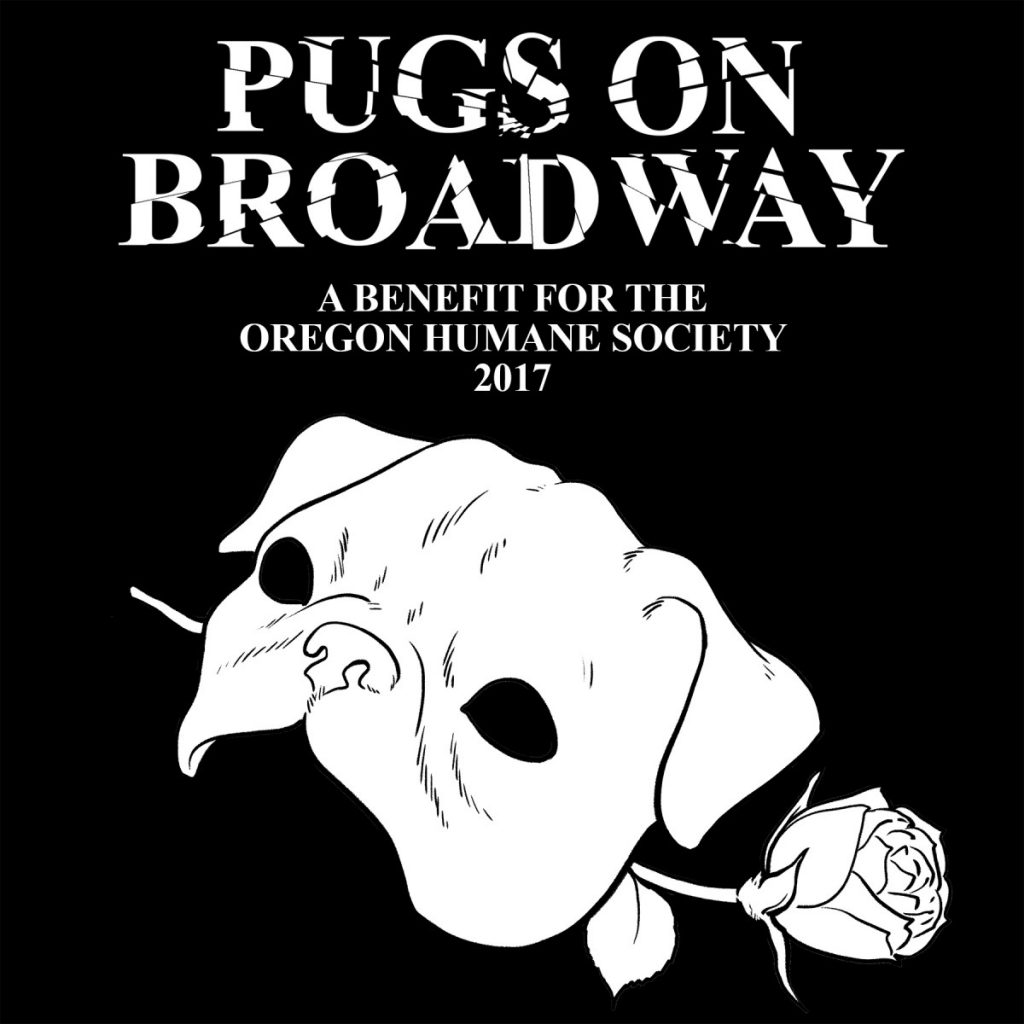 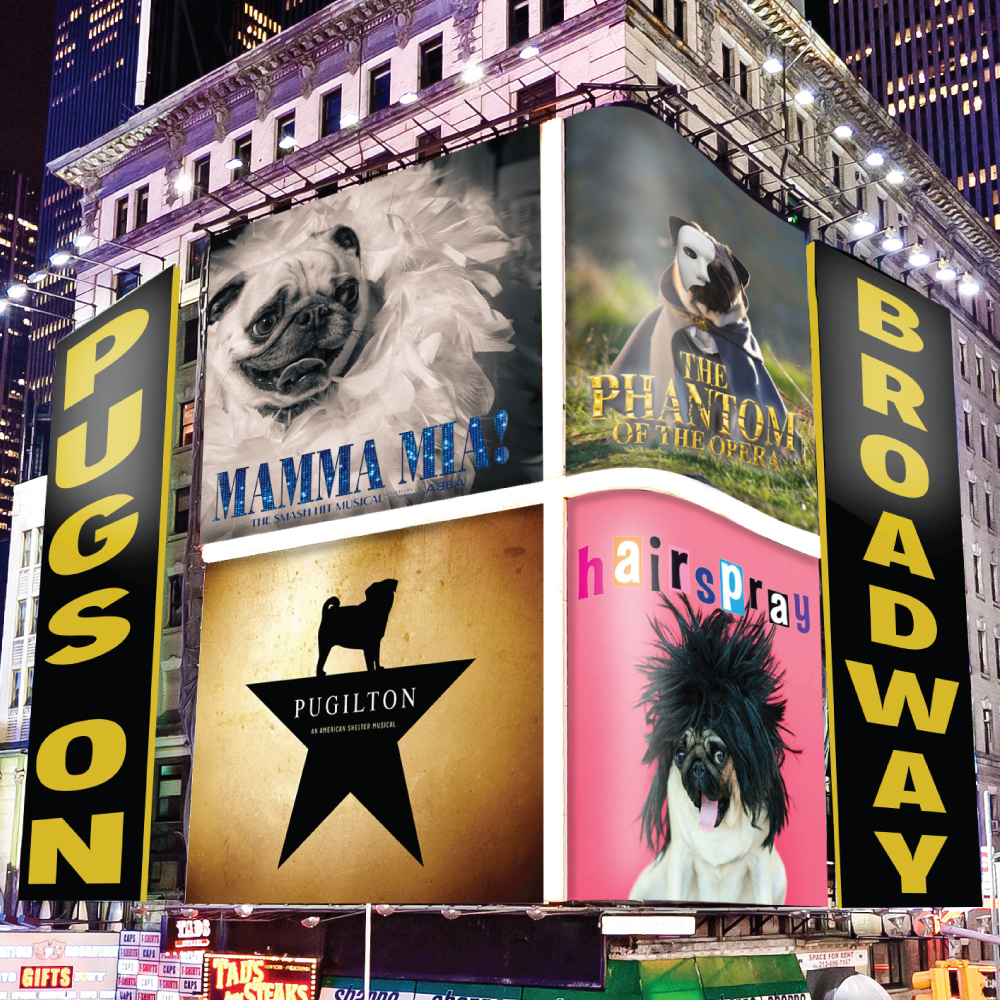 Pugs on Broadway was a hit!