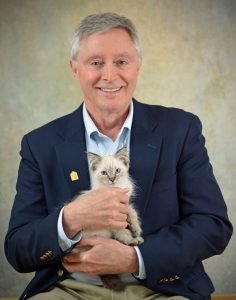 Get to know Leon in this Q&A…

Tell us a little about your history.

After college and the Air Force I was a police officer for 11 years, first in Dallas, Oregon then in Salem. Then I went to law school at UO and after graduating I practiced divorce law and served as a part time municipal judge. In 2004, after serving in several different municipal courts, I became a full-time circuit court judge for Multnomah County. It was an appointed position, and during the 2010 economic downturn several positions got cut, including mine. I then went to work at the police academy in Salem as a professional standards investigator. I did that for five years and then retired in 2016.

In your career, what has been your most compelling case?

What brought you to your current position at OHS?

After two and a half years of retirement I was recruited for the interim VP of Humane Investigations position by Rod Brown, a retired law enforcement professional who was consulting with the OHS Investigations Department. We had worked together at Salem PD, and again in McMinnville when he was police chief and I was municipal judge. When Rod recruited me, I declined at first then he persuaded me to agree to the interim position. Then I started working here and loved it, so when I was asked to become permanent, I gladly accepted.

What made you want to join OHS?

The passion of the people who work and volunteer here- it’s just amazing! Before this I hadn’t had any contact with OHS, didn’t know anyone who worked here, didn’t really understand the mission. I came here as the interim VP of Humane Investigations, but when I learned about the mission and passion and how well it’s run, I found something that appealed to me. I wanted to help and be a part of an important purpose.

What does your experience in public service and law enforcement bring to OHS?

I’ve been in public service in various capacities since 1977, so I bring a broad and in-depth knowledge of law enforcement practices and the justice system that I can apply to the OHS Investigations Department.

Starting with your position, can you tell me about the Investigations Team structure? Who does what?

As the Vice President I oversee the operations of the Investigations Department and directly supervise the Humane Special Agents, who are commissioned by the Oregon State Police to enforce animal laws. I also serve as a member of the OHS Executive Team.

Our Staff Attorney is the liaison between Investigations and District Attorneys’ offices that handle our cases. She also works on legislation relating to animal neglect and abuse.

Our Forensics Coordinator serves as liaison between Investigations and the medical teams and assists the vets who examine our evidence animals. The Case and Outreach Coordinator processes incoming complaints, serves as one of the evidence technicians, and educates the public about our mission, especially on the importance of reporting animal abuse.

One Investigations Coordinator is our primary evidence technician and responsible for the operations of the evidence room, processes incoming complaints, interacts with the public, and supports our Humane Special Agents with research. Another Investigations Coordinator also processes incoming complaints, compiles statistics, and serves as our LEDS (Law Enforcement Data System) representative.

Our Humane Special Agents are the ones in the field, responding to calls and investigating cases of animal neglect and abuse. All of our personnel also assist in the more extensive field operations such as scene processing in cases involving search warrants, and testify in court on their roles in these cases.

What is the role of a Humane Special Agent? What does their day to day look like?

The officer responds to assigned calls that come in to OHS through phone calls and our online report. They check on the welfare of animals and investigate complaints of possible abuse or neglect and determine whether a crime has been committed. If they do find a crime and identify the suspect, they will issue a citation to have them appear in court. Sometimes they need to educate owners on the appropriate care, feeding and medical needs for their pets.

What role does forensics play in cases?

When we get animals in that are abused, ill, or deceased, forensics is vital to determining the cause. This is necessary so that we can properly determine if a crime has been committed.

What is the most significant law (or laws) that have made Oregon a leader in animal welfare?

I think that the elevation of some animal abuse crimes to felony level has made the most significant impact. There’s a lot more that you can require of somebody who has been convicted of a felony, such as significantly heavier fines and prohibiting animal ownership. Not only can it stop the abusers, but it also sends a message that Oregon will not tolerate that abuse of animals.

Where do you see the state of animal welfare in Oregon in the next 10 years?

Learn more about humane investigation and law enforcement at OHS.