The 16th annual OHS Pug Crawl was truly out of this world. A record-breaking crowd estimated at 2,200 people and 800 pugs gathered May 22 in Portland to celebrate Star Wars: The Pug Awakens. The theme for this year’s costumed pug parade proved to be epic, with legions of pugs from galaxies far, far away arriving to take part in the festivities outside of the Portland Brewing Company Taproom in Northwest Portland.

Pug Crawl is a Portland tradition combining three ingredients prized by residents of the Pacific Northwest: microbrew beer, pugs, and helping shelter animals. This year’s attendance was estimated to be twice as high as last year’s Pug Crawl, a tribute to the popularity of pugs and the adoration they receive from their human companions.

Pug owners also showed their creativity by incorporating pugs into costumes that depicted the Death Star, Cloud City, TIE and X-Wing Fighters, BB8, the Millennium Falcon, an AT-AT, the Cantina and a Star Wars lunch box.

Organizers created a new category to honor the largest group of pugs to ever enter the contest as a single group. An interstellar group of pugs and people—including 28 pugs and 40 humans—paraded together as a marching band. Pacific Pug Rescue was awarded the first ever Group Grand Prize for their entry, which included Imperial Storm Troopers, Jedi Knights, the Millennium Falcon and more. A pair of horn players set the tone by playing the Star Wars theme as the group paraded down NW 31st Avenue.

The judging panel awarded first prize in the costume contest to Helga the Hutt, who was attired in a striking handmade Jabba the Hutt costume created by Milwaukie resident Gretchen Fersch.

Second prize went to the pugs Maya and Cash, who were piloting a six-foot-wide Imperial TIE Fighter. Maya and Cash were accompanied by human co-pilots Brade and Lorraine Nicholson of Aloha.

Merriweather the pug, who entered the parade as Obi Pug Kenobi, was honored with third place. He was accompanied by Jessica James as Luke Dogwalker, as well as other family members portraying Han Solo and Princess Leia. Fourth place went to the pug Keiki, who appeared as a resident of Cloud City. Cloud City and Keiki rested on the shoulders of Liz Nelson.

Pug Crawl raised approximately $28,000 for shelter pets, the highest amount in the history of the event. All funds go to support the Oregon Humane Society, which found homes for more than 11,500 pets last year. OHS extends thanks to the Portland Brewing Company for sponsoring the event. Other supporting sponsors included Lexidog Boutique and Social Club, PEMCO Insurance, Unleashed by Petco, and Heal Animal Massage. Raffle prizes provided by BarkHappy.

Thanks to our volunteer event photographer, Ben Koker, for this great set of Pug Crawl pics! See them in full resolution and order copies here » 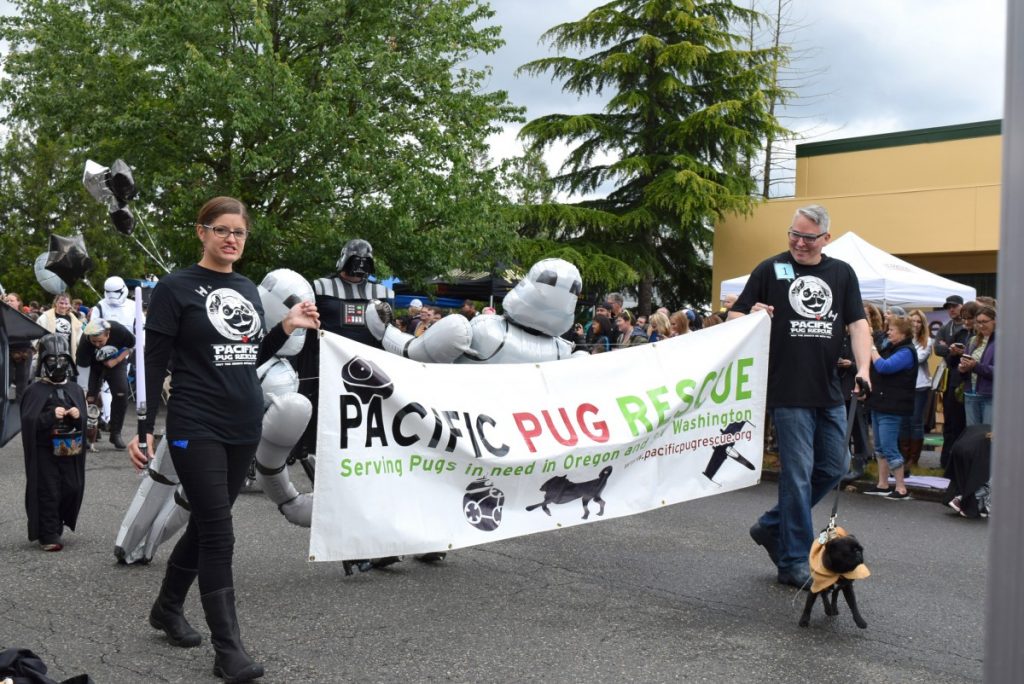 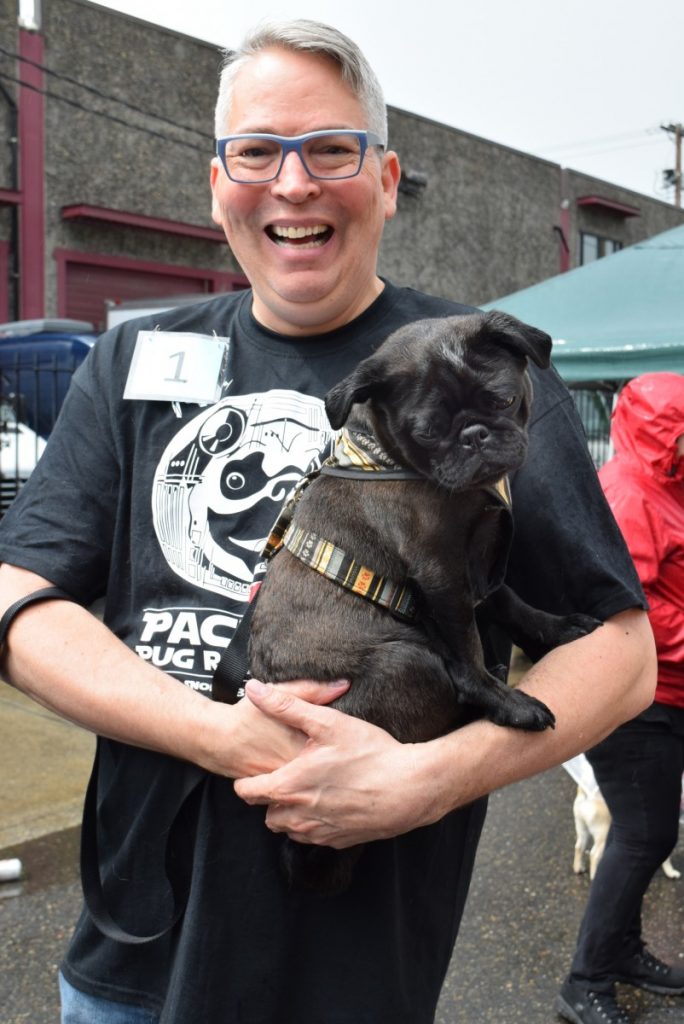 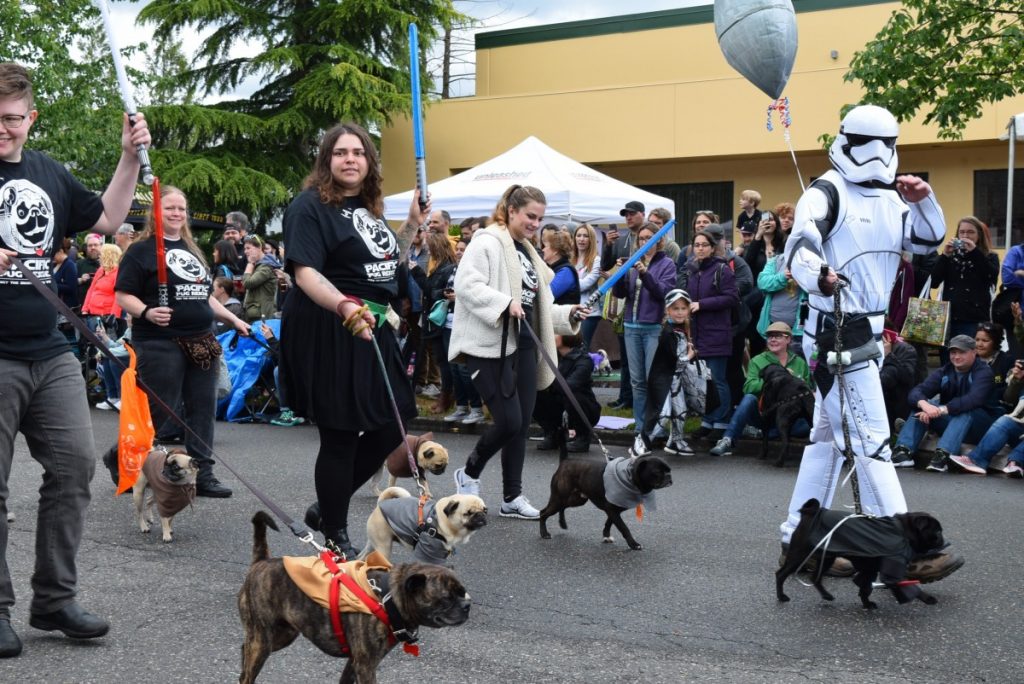 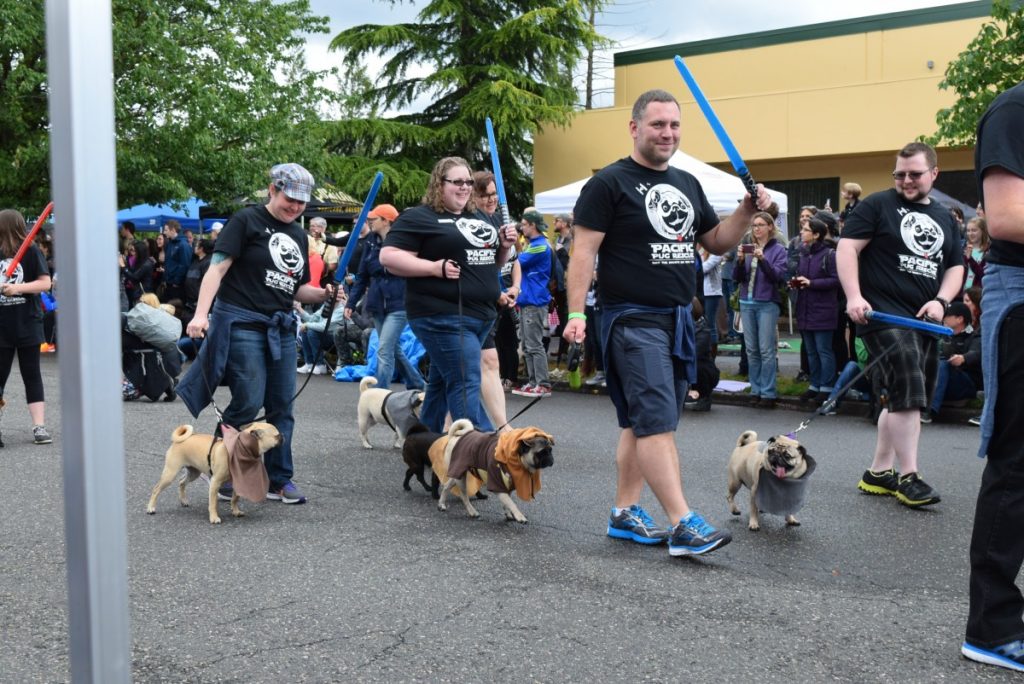 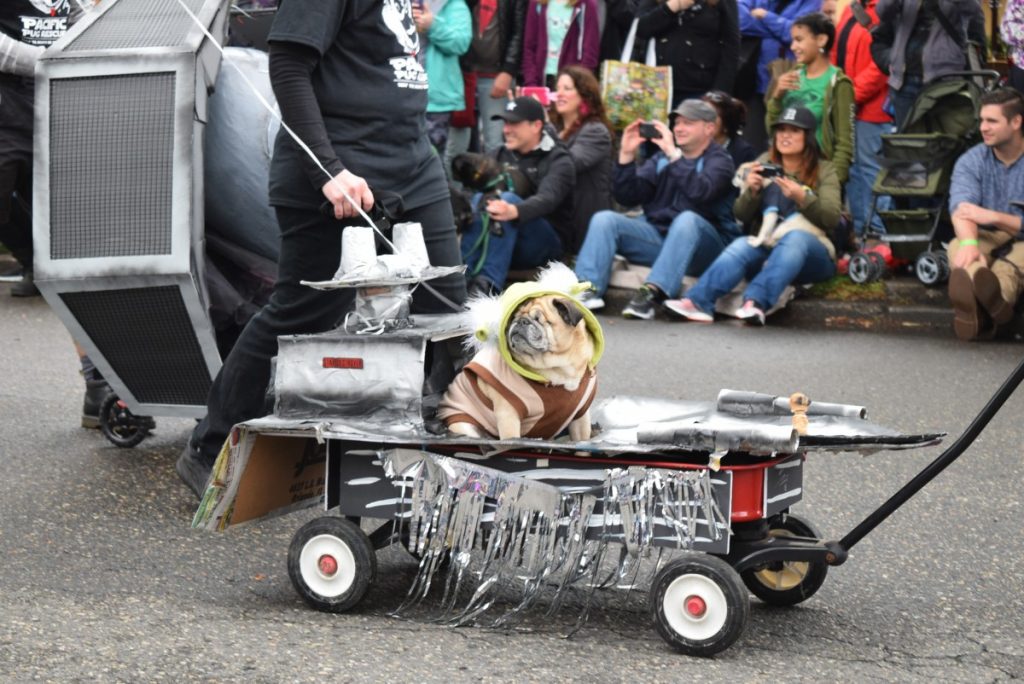 Yoda pug rides in style, he does 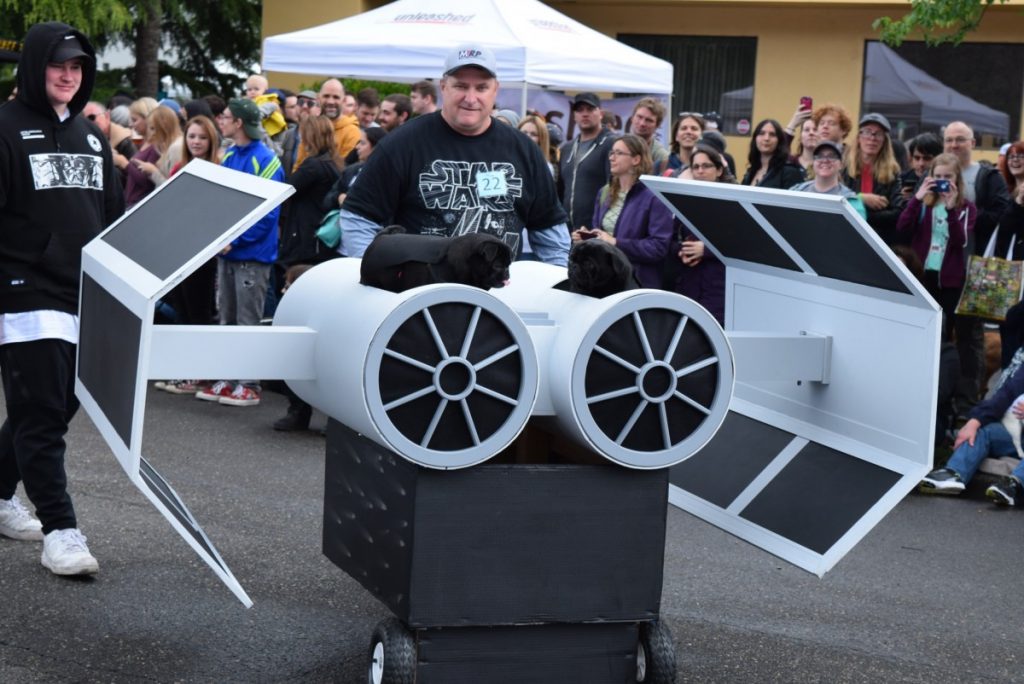 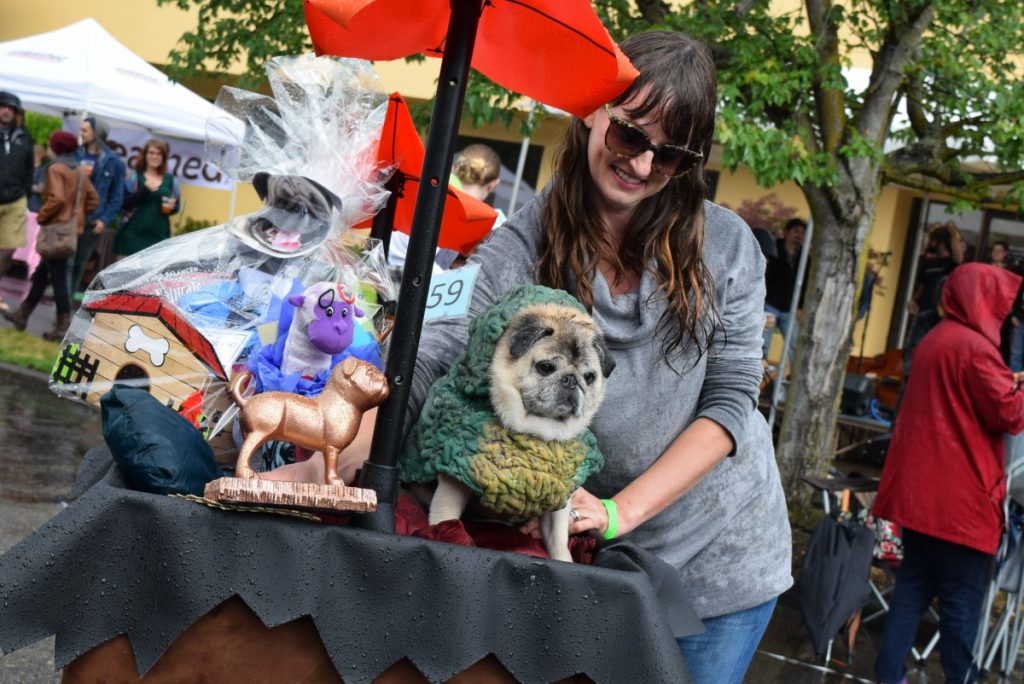 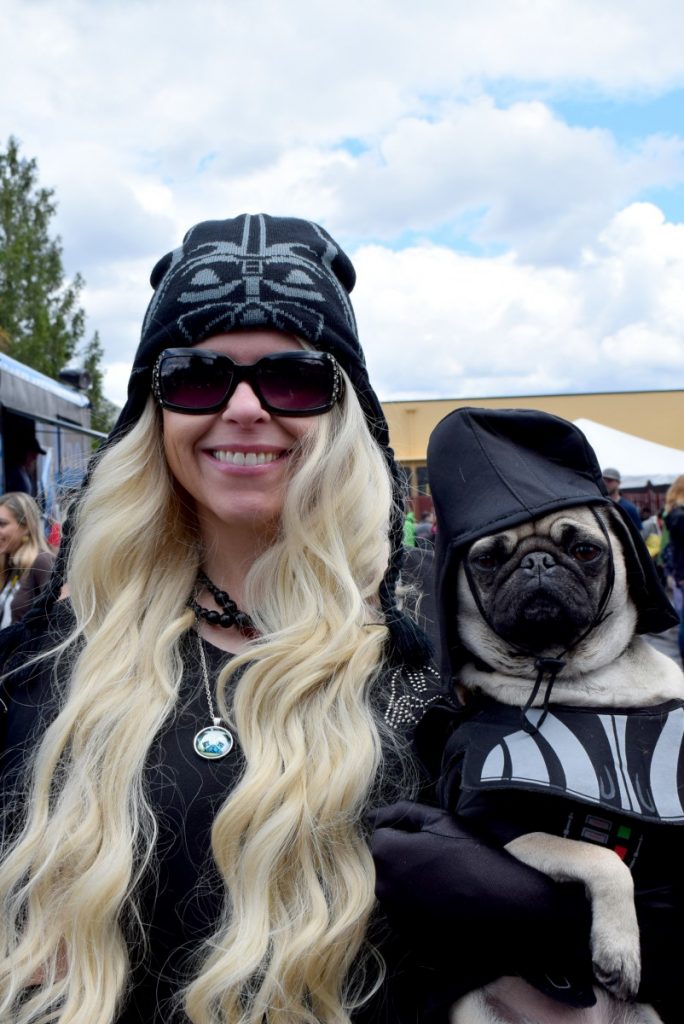 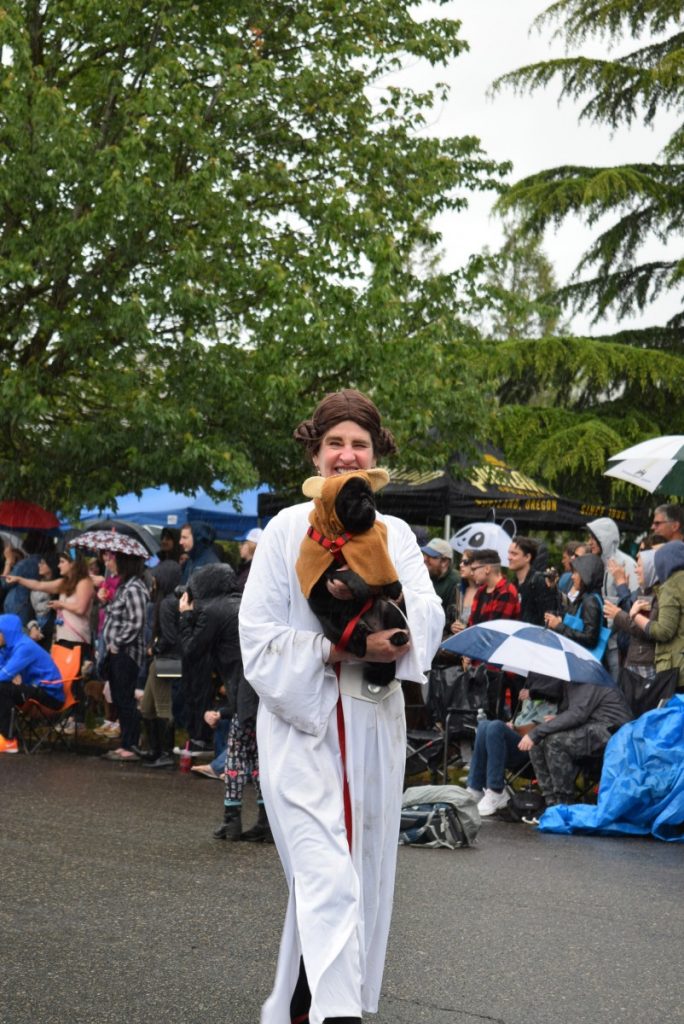 Leia and her Ewok 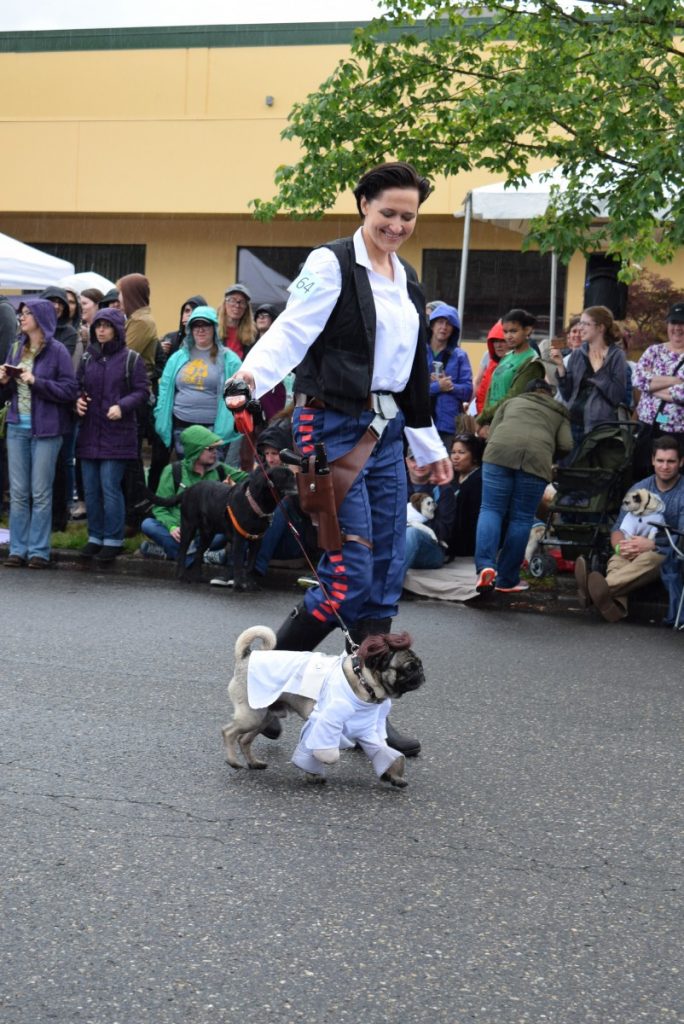 Look out: the AT-AT is coming! These are the pugs you’re looking for. 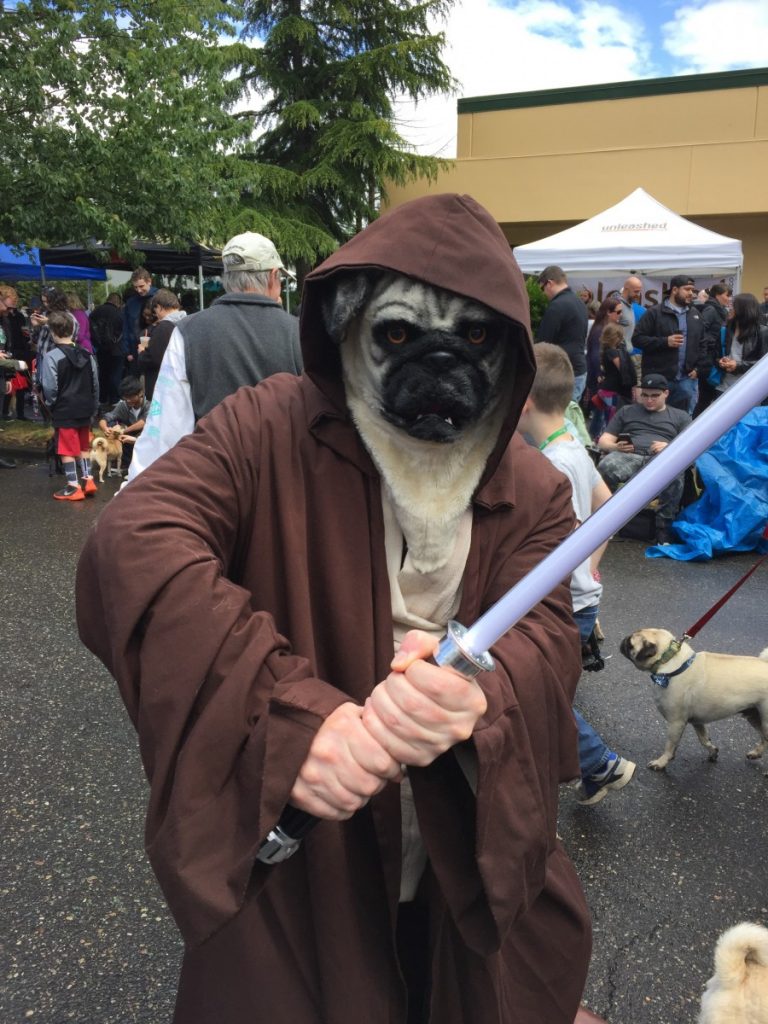 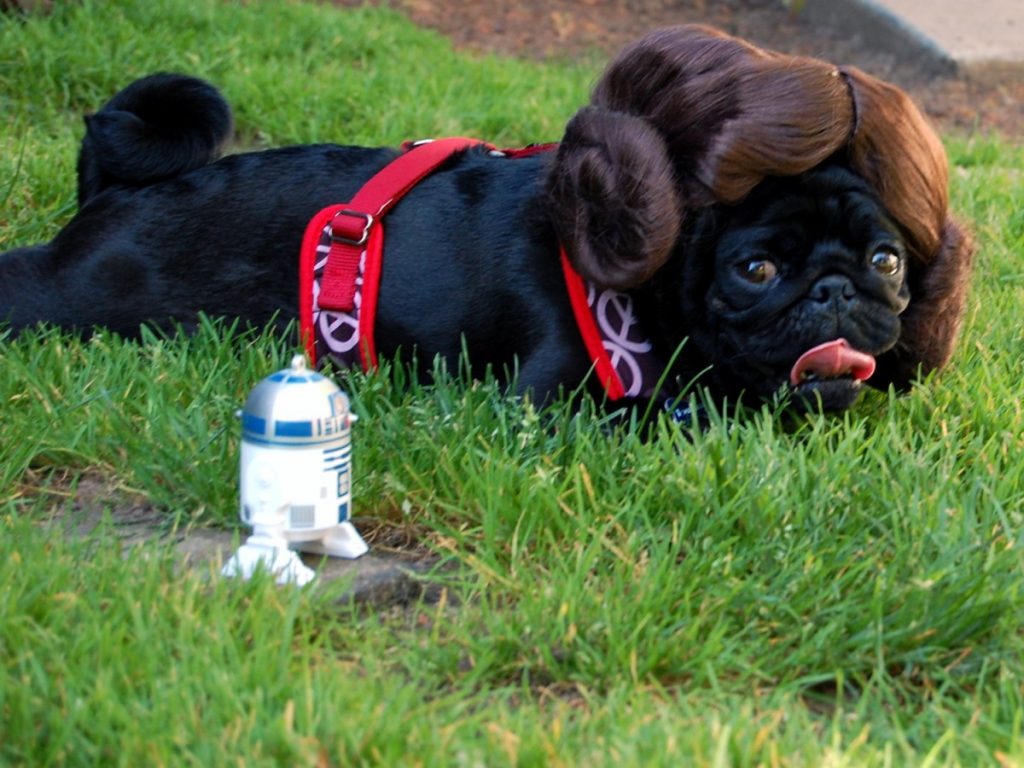 A few short video clips from the Pug Crawl, so you can enjoy the “action!”

Pacific Pug Rescue marches in the Parade of Pugs:

A slow-mo clip (what else?) of Helga the Hutt, costume winner: